By: Cori
In: On the Edge, Realistic Fiction (YA), Young Adult Book Reviews 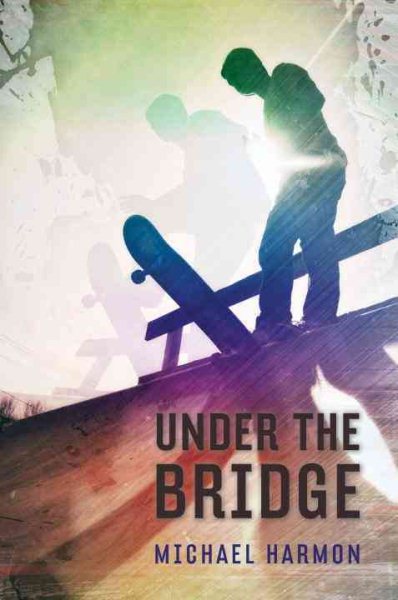 The bond between brothers is at the heart of Michael Harmon‘s latest, Under the Bridge.  Tate’s younger brother, Indy, is probably the best skateboarder in Spokane.  The guys in the crew, Indy, Tate, Pipe and Sid, are tight like brothers and they live to ride.  Their neighborhood is on the fringe of the seedy underbelly of the city where drugs and crime are rampant and murder happens almost every day, and just last year they lost one of their own to an overdose.  Tate’s the crew’s unofficial leader and he feels an obligation to protect his brothers as much as he can.  And its not enough to watch out for the guys when they’re out on the streets; his duty extends all the way home, since Indy and their dad have been butting heads ever since anyone can remember.

When Indy pushes their dad too far and gets kicked out, Tate feels how heavy the weight of his obligation really is.    Their dad’s anger runs so deep it seems almost hopeless to try to convince him to let Indy come home, even if Tate is somehow able to persuade Indy to give their dad another chance.  When Tate discovers that Indy’s using again and he’s gotten himself mixed up with a ruthless drug kingpin, the stakes are ratcheted up beyond Tate’s ability to simply muscle his way through to a solution.  And at the same time, Tate’s faced with some choices of his own: should he try out for a chance to be a pro-skater at an upcoming pro-am contest; is it worth it to pursue his burgeoning feelings about a smart, sporty girl at school who’s started paying attention to him; and does his tendency to act out of a place of anger, often without thinking first, really mean his on the path to becoming just like his father.

Harmon’s realistic portrayal of a guy facing some tough moral conflicts, trying to set things right, figure out whom to trust and what he really wants for himself is spot on.   You can’t help but feel a swell of elation (and relief) as Tate realizes that having a purpose makes a difference and that ultimately, it’s not the rules that you follow that matter, it’s how you follow them.