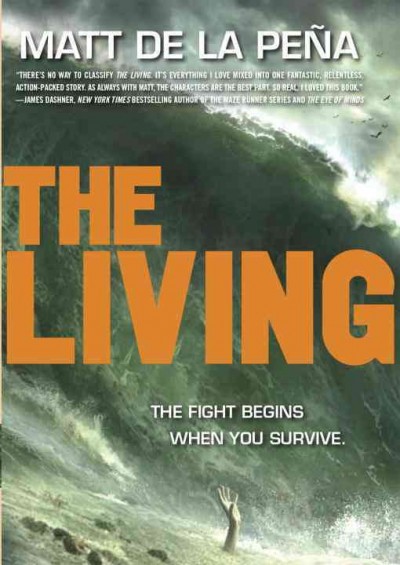 I’m not sure what to say about Matt de la Pena’s The Living.  I’ve been wrestling with how to review this book for a couple of weeks now and I still haven’t really found a place to start.  The blurb on the back of the ARC says “genre-bending” and I think that’s the best I can come up with too; that’s not because I wasn’t engaged by the story, didn’t care about the characters, and wasn’t thinking about Shy and his unbelievable 8 days long after I closed the back cover, it’s just that The Living is . . . different.

Shy’s taken a job as a summer employee for Paradise Cruise Lines.  Three eight-day voyages get him out of his San Diego neighborhood of Otay Mesa and will earn him a pretty decent amount of cash he so can help out his mom, buy himself some new kicks, and maybe even take a female out for a classy night on the town.  Towel Boy by day and Water Boy at night, Shy’s job isn’t bad, even though catering to the rich, white clientele on the ship is starkly different from life in his mostly Mexican-immigrant neighborhood and his modest background.  Just 6 days into the first voyage, however, things change abruptly when Shy unsuccessfully tries to save a passenger from throwing himself overboard.  Shaken by both his inability to save the man and the man’s unsettling, cryptic last words, Shy tries to steel himself for his second voyage.   But then a series of massive earthquakes destroy the Western coast of the US, from Southern California north into Canada, unleashing a powerful tsunami that destroys the ship, kills most onboard, and leaves Shy ill-equipped on a lifeboat with a rich white girl.

Shy and Addie are adrift for 8 perilous days without food, fresh water, or any real hope of rescue.  In a desperate attempt to fight off the sharks that have been trailing them for days, Addie fires their last flare into the sea and Shy realizes there’s no way anyone will find them now.  But miraculously, the next time Shy awakens, he’s staring into the face of someone from the cruise ship, the enigmatic shoe shine guy, and it appears their prayers have been answered.  Shoeshine takes them to a remote island that formerly housed an exclusive resort and research facility where Addie’s father’s company supposedly created medical equipment.  But something isn’t right on the island: since the labs were destroyed by the tsunami, many people have taken ill with the same strange, deadly disease that was spreading through poor communities in SoCal before the earthquakes and even the few cruise survivors who’ve made it to the island are falling victim to the illness.  Shy and a few of his friends from the crew have very little time to figure out what’s going on, whom they can trust, and how (or if) they’ll get off the island alive.

Part of the trouble I’ve had with The Living may originate in my own expectations:  Matt de la Pena’s previous realistic fiction (Mexican WhiteBoy, We Were Here, and more) deftly and poignantly portrays the struggle to find your own identity in a world of definitions and divisions and I will be the first to admit that’s what I expected to discover here.  While this search for identity and cultural significance is at the root of The Living, the way it’s explored is wholly unexpected, mind-blowing, and a huge departure from anything that de la Pena has done before.  Does it “work”? Is his foray into sci-fi a success?  Honestly, I’m still on the fence.  You’ll have to pick up a copy of The Living when it comes out in Nov. 2013 and see for yourself.