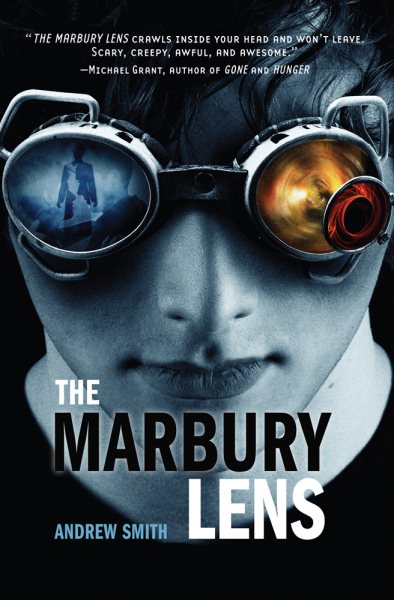 When people drive by an accident, or a house fire, or some other horror that routinely befalls our fellow human beings, we’re compelled to look. To stare. To seek out signs of lost normalcy, the life that was, the people as they were “before.”  It’s an uncontrollable urge to peer in, despite the fact that we’re aware of the suffering and pain wrapped up in the debris.  Andrew Smith‘s The Marbury Lens is one of those horrors that you can’t look away from, no matter how much you want to, no matter how gruesome the detail, no matter the pain twisting in your gut as you eagerly turn the next page to see what new pain could possibly befall 16 year old Jack.

About to leave on a summer trip to London, Jack gets way too drunk at his best friend Connor’s party.  Passed out on a park bench, Jack accepts a ride home from a mild-mannered man.  When Jack comes to, he finds himself bound by the ankle in a stark, lonely bedroom, stripped down to his underwear and in a stupor from some kind of drug.  After a horrific encounter with his captor, Freddie, Jack narrowly escapes and makes his way back to Connor’s house where Jack swears Connor to secrecy about the whole nightmarish weekend.  Jack soon realizes, though, that it’s not so easy to put the whole thing out of his mind; he’s plagued with post-traumatic visions, thoughts, tremors, and sweats.  Thinking distance may help, Jack leaves for London, only to have his sense of paranoia and insecurity heightened when he realizes he’s been followed.

Jack confronts the scruffy man, Henry, who’s been watching him, and is completely taken aback by Henry’s claims of knowing Jack “in Marbury”, a place Jack has never heard of and is sure he’s never been.  When Jack puts on the glasses Henry has left for him, he’s instantly transported into an alternate reality that is full of horrors: war, plagues, flesh eating bugs, monsters who hunt and brutally slay humans, and a rag-tag bundle of kids for whom he’s apparently the protector.  As Jack finds himself drawn deeper and deeper into this alternate reality, the lines between his two worlds blur and he can’t tell what’s real and what isn’t.  He loses all sense of time and place in the “real” world whenever he’s in Marbury, putting himself and others on both sides of the lens in danger.  And to make matters worse (if that’s even possible),  Jack discovers a frightening connection between the monsters in Marbury and the people in the “real” world.

Questions abound amid the gore – is Marbury real or is Jack losing his mind?  Could Marbury be the place his mind has taken him while he’s actually still tied up in Freddie’s house?  Is everyone really a monster inside and is it just the thin guise of “civilization” that keeps the “monsters” in check?  And really, is our would truly safe and civilized? At least in Marbury it’s easy to tell who the monsters are.  Not for the faint of heart, nor those for whom gore is off-putting, but anyone who ponders the known and unknown edge of the horror within won’t be able to look away from The Marbury Lens.