Twelve-year-old Hope Toriella is good at impossible things but not good at inventing, and inventing is something the community of White Rock values to move the community forward, provide comforts, and raise their quality of life.  Hope wishes she could measure up and make her parents and community proud—maybe even earn a place on the Difference of One stone.

White Rock is a small community, both guarded and threatened by the Bomb’s Breath, an invisible oxygen-rich a 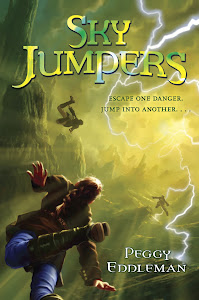 ir mass capable of suffocating the unsuspecting.  It is this side effect of World War III that intrigues Hope and her fellow Sky Jumpers, Aaren and Brock.  “When the green bombs hit, they left behind side effects.  Besides new plants, metals having different properties, weather patterns changing, and the existence of the Bomb’s Breath” (35), the green bombs destroyed most technology, including the ability to create a stable magnet, conditions which have altered life considerably for Earth’s survivors.

Although Hope’s preference for risky behavior tends to get her into trouble, when bandits invade White Rock and threaten her community’s survival, doing something crazy might actually save them.  On her mission to save the town, Hope discovers she’s more of a leader than she realizes, since in nearly every complicated situation, she seems to figure out what to do.  With help from Aaren and Brock, Hope is willing to take the risks and accept the challenge of finding a way out of the bandit mess, but the trio discovers that wishing doesn’t change things, and that danger has a way of cropping up unexpectedly to threaten defeat.

These are the events in Book I of the Sky Jumpers series by Peggy Eddleman, a fast paced, post-apocalyptic novel packed with adventure.