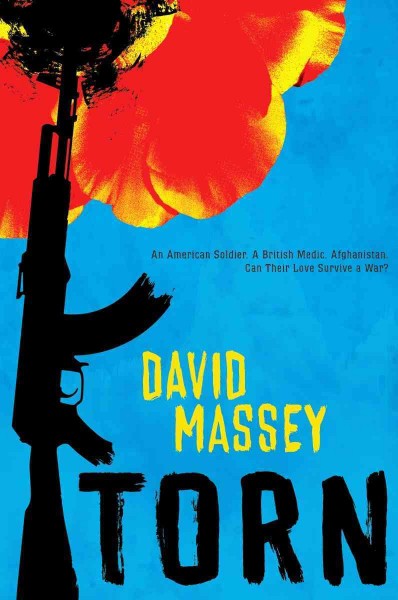 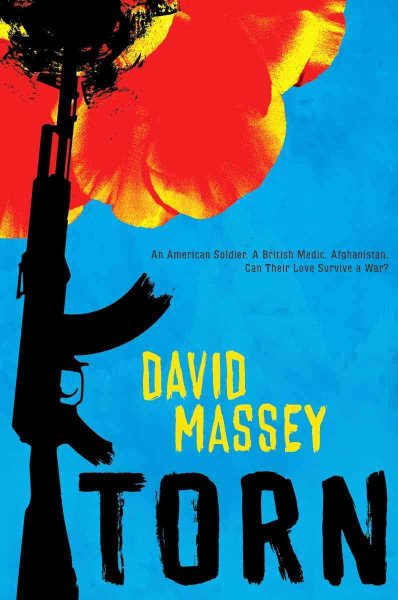 Whoa – I was knocked back by David Massey‘s debut, Torn.

Based on simply the slightly cheesy tease on the cover (“An American Soldier. A British Medic. Afghanistan. Can their love survive a War?”), I wasn’t sure what to expect from the book, but within the first few pages I was so captivated, horrified, and walloped by this powerful story that I stayed glued in my chair until I finished the book.  At a swiftly-paced 274 pages, the time flew and before I knew it I was breathlessly coming up for air and looking at war in a whole new way. And then the very next morning, I heard this riveting story on NPR’s Morning Edition about war photography: “Haunting Images Chronicle 165 Years of a World at War”.  I was struck by the statement from the interviewer: “No photograph can capture the full horror. You have to be there, fight the war, to get it” and I thought the same for the book that was still sitting heavily on my chest.

19 year old British medic Private Ellie Nielson has been stationed at FOB Freedom in hot, dusty, lawless Helmand province.  Despite being years in to the conflict and daily patrols across the countryside, the Taliban has continued to terrorize the people, the efforts and nation building have stagnated, and an uneasy semblance of tolerance exists between the civilians and the Coalition forces.  Out on a standard patrol, Ellie’s unit encounters a fierce firefight in a local village that appears to be between Afghan security forces and a rag-tag group of kids.  When one of the children is captured, the Brits discover he’s part of a motley group calling themselves the Young Martyrs and they’re fighting anyone – Taliban, Coalition forces, Afghans – who are indiscriminately killing the people in the mountain villages they call home.  Searching for answers to both the origin of the Young Martyrs and the identity of a mysterious Afghan girl who seems to be shadowing her unit, Ellie stumbles upon a dangerous conspiracy that destroyed a whole Afghan village and that has the potential to upset the balance of power in the region.

In Torn, Massey strikes just the right balance for the reader, making sure we feel the weight of battle and the emotional and psychological toll it takes on Ellie while still enabling us to enjoy a well crafted, thought-provoking story.  The stakes are high and the pace is relentless throughout, but at the same time, Massey develops the humanity of the characters, adding small touches and foibles to help build a strong emotional bond.  Some of the things that made Torn really resonate for me: