Reader’s Review: Sasquatch in the Paint 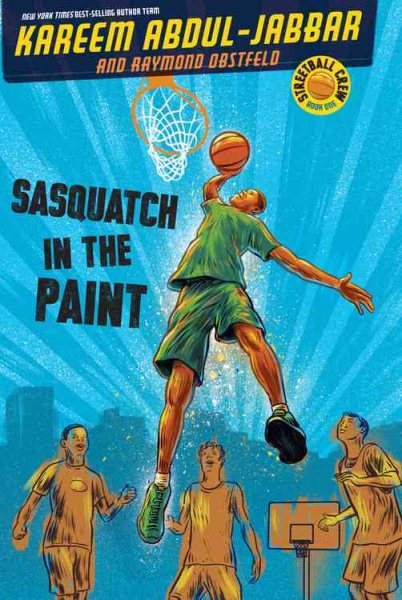 The story of Sasquatch in the Paint, written by Kareem Abdul-Jabbar and Raymond Obstfeld, is one that the majority of us can relate to. We were all once that awkward kid in junior high trying to find a place to fit in, whether it was a position in the status quo or not, we all just wanted to have friends to sit with at lunch. In the seventh grade Theo had thought that he would forever be one of the nerds on campus, he and his best friend Brian had recently joined the Brain Train and could not be happier. The Brain Train was a club on campus that the smart kids from every academic field joined and competed against other child prodigies from other districts. Theo and Brian were content with their place on the totem pole of popularity that is until summer came by and left Theo a foot taller and Brian unchanged. Theo was asked to join the basketball team, despite his obvious lack of athletic ability, and he was promoted to the head team of the Brain Train because he was now an eighth grader. Theo and Brian never ceased to be friends because being on the basketball team did nothing to change Theo’s popularity status. He was horrid at the sport and everyone except the Coach felt no qualms about reminding him of this. To make things even worse, Theo was starting to notice girls more and more, and without a mom to talk to it about, he confided in Brian. Then one day a girl took notice of Theo at a basketball game but not in a good way, she coined the nickname Sasquatch for Theo after an especially bad first game of the season. After the initial encounter, this girl that Theo hated yet was in awe of, Rain, started showing up more and more. With her came plenty of baggage that Theo felt obligated through sift through, while Rain easily ruffled through Theo’s personal life. With Basketball and the Brain Train, Theo was feeling enough pressure without having to worry about the unexplainable feelings he had for a girl who caused more strife than anything. Just when you think that things can get no worse for Theo, he gets thrown into family drama when his fame-aspiring cousin gives him a cover CD and the next day it ends up on YouTube with 200,000 views. Theo’s cousin, Gavin, feel betrayed and wants to know how the CD got on YouTube. Now Theo has to fight to keep his position on the Brain Tree after having fallen behind the rest of the team, he has to prove to the Coach and himself that he really does belong on the basketball court, he needs to figure out what to do with Rain, and he has to appease his deranged cousin. Can he do manage to do all of this or will the stress of teenage living prove too difficult?

Sasquatch in the Paint is written by NBA all-time leading scorer and record holder for the most field goals and minutes played, Kareem Abdul-Jabbar.  In 1995 Abdul-Jabbar was inducted into the NBA Hall of Fame and has since retired from the sport. He has worked as an actor, basketball coach, and New York Times bestselling author. A bronze statue of Abdul-Jabbar performing his signature move, The Skyhook, was unveiled in front of the Los Angeles Staples Center in 2012.  Abdul-Jabbar co-wrote Sasquatch in the Paint with award winning novelist, screen writer, and nonfiction writer, Raymond Obstfeld. Obstfeld has collaborated with Abdul-Jabbar on two other occasions, sports memoir On the Shoulders of a Giant: My Journey through the Harlem Renaissance and picture book, What Color Is My World? Obstfeld is currently an associate professor teaching creative writing at Orange Coast College.

I highly recommend this book for teens and young adults between the ages of 12 and 19. The book is a delightful page turner with plenty of relatable experience embedded in the plot. I commend Abdul-Jabbar and Obstfeld on impeccably written story of challenges faced while growing up.