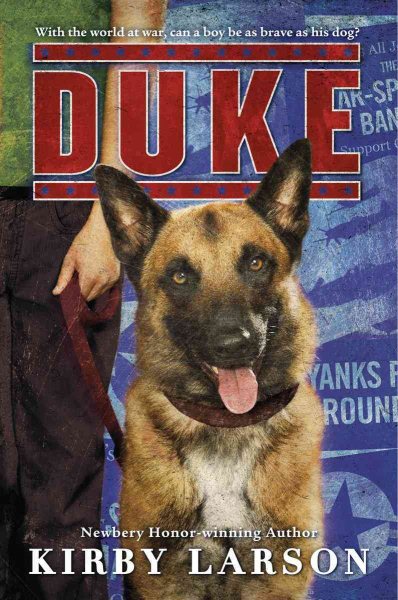 A book written about WWII from a perspective rarely seen, that of a little boy who loaned his dog to the army because he wanted to make his daddy proud. That is exactly what Hobart “Hobie” Hanson did in Duke by Kirby Larson. Hobie’s dad is in Europe flying fighter jets for the American army in WWII. Hobie and his family, his mother and little sister June, have been doing everything they can from home to be good home front soldiers. They have planted a victory garden, Hobie makes model airplanes that are used to train soldiers, and each member of the family is working towards buying war bonds. The beginning of the story takes place on Hobie’s street the weekend before school is set to start back after winter break. Hobie has to say good bye to his best friend, Scooter, because Scooter and his family are moving out of Seattle. Hobie feels like the only person he has left to talk to is his dog, Duke. Now, Hobie feels like he is doing everything within his capability to help the war effort without actually being on the front lines. Mitch Mitchel, however, the school bully, always seems to find something “un-American” about Hobie. Things get even worse when Max Klien, a student of German descent, joins their class. Hobie and Max become good friends but that only fuels the fire even more when it comes to Mitch. One day after school, Hobie is walking home from the local grocery store with Duke when Mitch tries to give him a hard time. Duke comes to Hobie’s defense by pulling the bully down to the ground and clamping down on his pant leg. Mr. Rasmussen, a local Canine’s for Defense recruiter, just so happens to walk by at this exact moment. He thinks Duke has real potential to be a great canine soldier and gives Hobie his card. After some long and hard thinking, Hobie agrees to send Duke to battle. A decision easier said than done, after all, Hobie just lost his best friend not that long ago. As the tale unfolds, Hobie tries to get Duke back but realizes the good Duke is doing for the war effort, he comes to Max’s aide whenever Mitch is giving him a hard time about being German, and on top of everything else, Hobie has to deal with the rest of the issues that come with being a boy, like being the man of the house. Will Hobie get Duke back, will he ever see his dad again, and will he even make it to the end of his sixth grade year in one piece?

Kirby Larson is a Newberry Honor winning author. Larson has written many books that deal with the people that are affected by war other than the soldiers risking their lives. She brings a fresh and new perspective to the table. Larson has also co-written a plethora of award winning picture books. She currently lives in Washington State with her husband.

I would highly recommend this specific work of Larson’s. The writing technique she employed is descriptive and informative; it makes the reader feel like they are living the story. The journey is an emotional one, there are times the plot takes such a dramatic turn that it brings tears to one’s eyes. When a character is feeling dismal, the reader is feeling dismal. When a character feels like he could sprout wings and fly off into the sunset, the reader feels the same way. Kirby Larson is an amazing author and this particular story does nothing but enforce this fact.