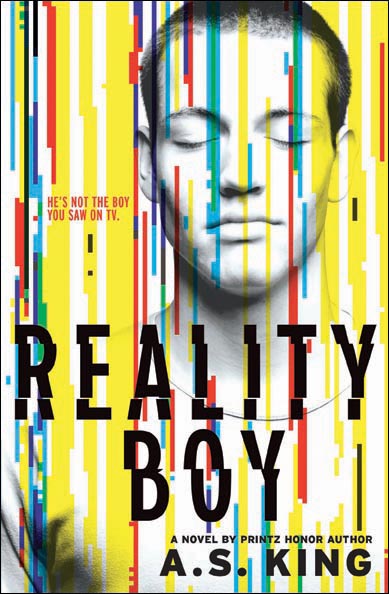 I honestly don’t know how she does it.

Every A.S. King book I read grabs me by the throat, reaches down into my heart, and completely engulfs me in a powerfully told, unflinchingly portrayed, ultimately redemptive story of a teenager on the edge of his or her own particular abyss.  King skillfully, lovingly, and realistically creates well-rounded young people whose lives are pretty crappy when the story opens but through their own choices, dogged perseverance, and sometimes a little help from a friend or an adult with a clue, rise above the cards that were dealt to them and come brilliantly, if not a little bruised, into their own.  When I spend time with her characters, I am spending time in the human experience – the good, the bad, the heartbreaking, and the quirky – and I close every single back cover knowing it’s OK to feel, OK to have needs and demands, and it’s damn well OK to take care of yourself.

In Reality Boy, King’s latest, seventeen year old Gerald Faust is the most infamous child-star reality TV ever produced.  Known as “The Crapper” for the two seasons when he was five and six years old and “The Network Nanny” aired his family’s troubles to the nation, Gerald is still haunted by his rage-filled youth.  His anger issues have resulted in violent outbursts, assaults, no friends, and a trajectory that everyone believes will land him behind bars.  Gerald has almost accepted the world’s judgments about him: denying himself even the smallest, most basic wants, withholding self-forgiveness for mistakes that he wasn’t mature enough to stop himself from making, and turning his anger inward and shutting himself off from the possibility of life after TV.  And yet, there’s still something in Gerald that craves compassion, understanding, and real human connection.  It allows him perspective about the trajectory of his life, courage to face his “triggers”, outbursts, and their consequences, and, if he’ll take a chance on trust, the possibility of being “just another human on a planet full of humans, but better equipped because I have demands.” (352)

Feeling redeemed, hopeful, and satisfied as I close the back cover of Reality Boy, I have only one thing to say -however you make it happen, Ms. King, keep it coming.  The YA world needs more of the magic you conjure up in each and every one of your convincing characters.