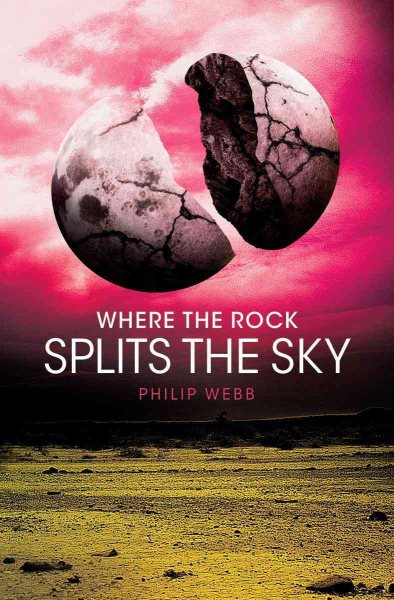 What a fun, imaginative book Philip Webb‘s Where the Rock Splits the Sky is! Well, perhaps the word “fun” isn’t quite right, as there is nothing fun about the adventure Megan, Luis, and Kelly are having.  Basically, aliens have stopped the world from spinning on its axis, thereby plunging its surviving zones back in time about 100 years. Megan is on a quest to find her father, and learn the secrets of what is to come.

Megan is brave, Luis is loyal, Kelly is a great “fish out of water”, the characters are interesting, and the premise is a great one. I read this book in a day, not because it was short, but because it was so engaging.  Philip Webb did a great job of painting the scenes for us.  This story evolves and changes with each new landscape the trio encounters.

That being said; I have one major concern. The story begins in Marfa, Texas. Luis, as his name implies, is Mexican-American. Most of the time Mr. Webb has him speaking like a mixture of Speedy Gonzalez and Tonto from the Lone Ranger (“Is not so long since Cisco here before.” “Still not so late, Sheriff. Head into wild Zone now.”). Speaking of the sheriff; he speaks appropriately/properly, most of the time.  So imagine my confusion when he suddenly states, “I’da knowed yesterday what I know now, I’da took you and your aunt west myself…before them sumbitches got within forty miles of Marfa Town.”

I have no idea if Mr. Webb is being funny, racist, or is just wildly uninformed. According to the back jacket, he lives in London. I can’t help but feel he based his characters’ speech on Looney Tunes characters. I hope the editor catches this and you, gentle readers will not understand about what I rant!