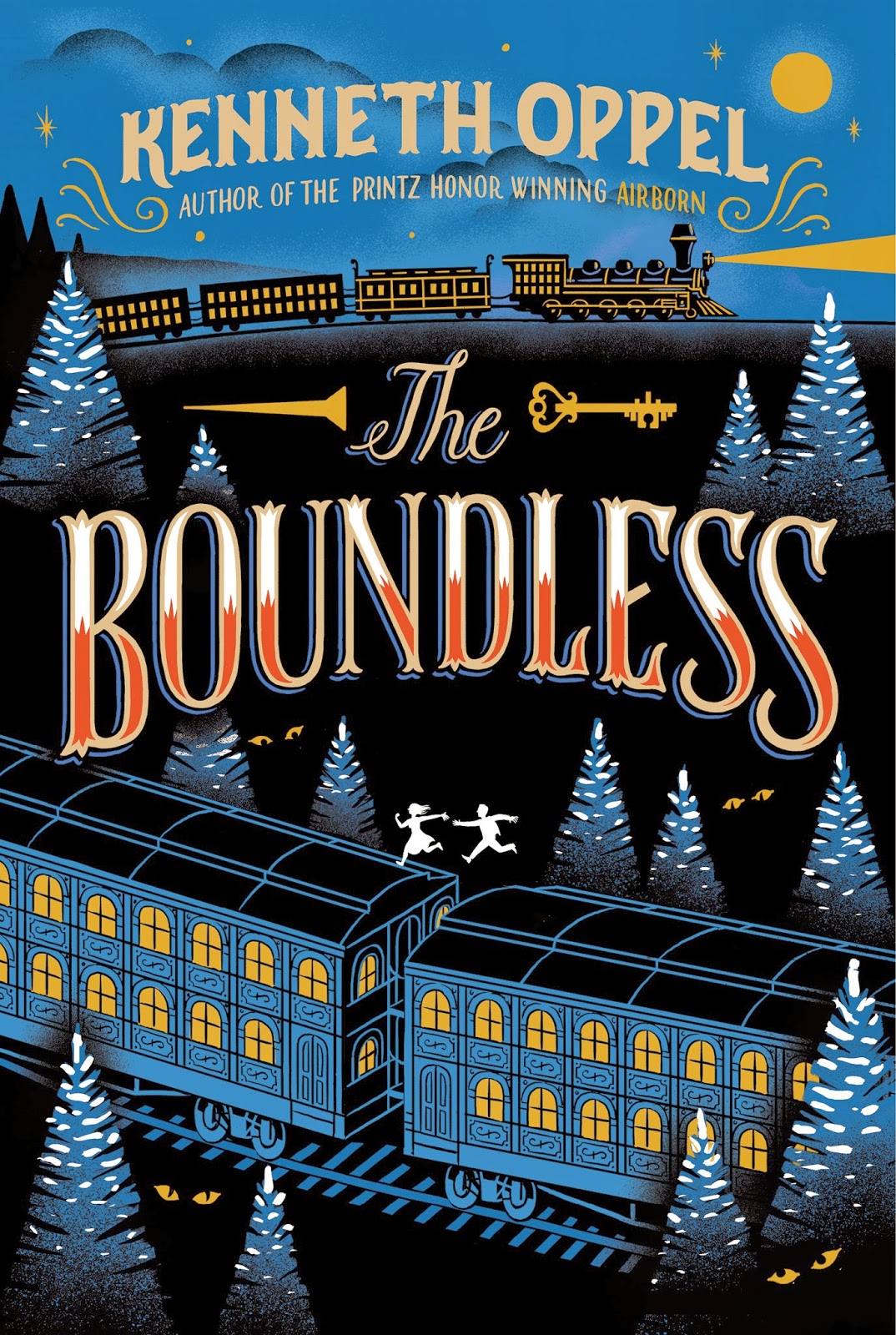 For readers who remember the adventures of Shade, a silverwing bat in the Silverwing Trilogy, Kenneth Oppel  delivers with equal measure, the action-packed and compelling story of Will Everett’s life in his most recent novel, The Boundless.

Set in in the late 1800s, at the time the Canadian Pacific Railway (CPR) was being built, Will, who taught himself to draw when he was ill and bedridden for weeks, is looking for adventure.  The only adventures he has had have been in his head or drawn in his sketchbook or lived out vicariously through his father’s letters from various rail construction sites.

When he arrives in Farewell, at the base of the mountain where his father is working, then 13-year-old Will encounters the not all perfect and pretty but striking Little Wonder, a circus performer who is half Norwegian and half French.  She taunts and teases Will and “steals” his Sasquatch tooth, then disappears.  On his way to Craigellachie, where the final spike will get driven into the rail, the first of Will’s many adventures begins.  A Sasquatch, a large hairy humanoid referred to as Big Foot in the United States, attacks the train, and an avalanche nearly kills him and his father.

Three years later, aboard the Boundless, the brain child of the manager of the CPR, Cornelius Van Horne, Will again crosses paths with the Little Wonder, whom he learns is actually Maren Amberson.  She has joined the Zirkus Dante circus as a wire walker, working for the ringmaster, a Métis named Mr. Dorian.  A lot has changed in three years.  His father is now a railroad executive, and Will now lives among the wealthy and rides in first class.  He also has a reunion with many of the same people who were in Craigellachie on that day when celebration turned tragedy.  Aboard the Boundless, “the world’s largest and most glorious train” (57), Will learns about ambition, greed, magic, social class disparity, injustice, and the many shades of darkness–both literally and figuratively.

Will also gets to know a side of his father he didn’t know existed.  Will’s passion is drawing; he is never without his sketchbook, yet his father forbids Will to attend art school in San Francisco, calling his desire to become an artist a foolhardy experiment, one he won’t pay for.  James Everett encourages Will to instead use his talent and his mind on the railroad’s expansion, designing bridges and fleets of ocean liners, but Will is not sure that is what he is meant to do.  In reply to Will’s argument, his father retorts: “Meant to do?  That’s nonsense.  A man does what he needs to do, to make his way in the world, to support a family” (54).  He wonders why his son would seek out poverty when better opportunities are available.

Will is afraid that his father sees him as too shy, too sensitive, too soft, but by the book’s end, readers—along with James Everett—learn that Will has a daredevil streak and a champion’s heart.  At risk to his own life, Will pays for the life-saving medicine that a boy in colonist class requires and draws him a picture of the beloved boat he had to leave behind.

Will’s journey to maturity features murder, theft, disappearing acts, and near-death experiences—enough adventure for a lifetime.  He not only learns about the power of wonder versus knowing but also about perspective.  About the fountain of youth, Mr. Dorian says, “Why is it any more magical than the sasquatch or the muskeg hag?  You’ve beheld both with your own eyes.  There’s magic about these things. We may not understand them yet, but they’re part of our word, and anything that exists in the world is real” (230). And about the “poorest of the poor [who have] washed up on the shores of our country to claim our land” (177), Mr. Dorian says, “My mother’s people are Cree Indian.  Perhaps it’s possible people like you have washed up on our shores.  A stimulating thought, don’t you think?” (177).

A mixture of historical fiction and magical realism, Oppel’s book blurs genres and delivers to readers another hit.  Despite its attempts at social commentary, at its core, The Boundless is an adventure tale laced with a smidgeon of love.