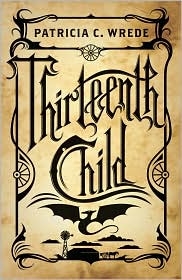 In the first book in the new Frontier Magic trilogy, fantasy writer Patricia C.  Wredeintroduces Eff, the 13th child of a large magical family.  Wrede imagines an alternate history of world, where magic and magical creatures co-exist seemlessly with history as we know it.

Eff’s twin brother, Lan, is the seventh son of a seventh son; in their magical world he is a rare, special, gifted and powerful person.  Being the 13th child is as powerful, but in the most negative way possible. Seen as a witch, a purveyor of bad luck and misfortune, Eff is shunned and blamed as much (or more) than Lan is praised and favored.

In part to escape this constrained world-view, Eff’s parents move (along with 7 of their children) to the frontier, on the very edge of the magically protected settlements to start a new life.  Eff should thrive there, away from the prejudice of the East, but instead she carries the fear of turning bad like a heavy burden, barely allowing herself a normal childhood.

The story follows her from age 5 until she is 18 when she finally has to make a choice to see herself and her power differently than the way she has her whole life.  Wrede’s coming of age story is slowly, carefully constructed to build a solid background for the future books in the series.  Eff is likeable and you can’t help but root for her and wish that she could summon the courage to escape the verbal abuse and doubts that were heaped upon her.  The magical elements of this world aren’t as engaging as those in the Harry Potter series, but they are woven in just enough to make the world believable and sow the seeds for future stories.