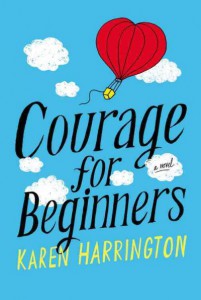 Mysti Murphy knows that the people in her family – “a person who paints and cooks and never leaves the house … a person with a job who gently tries to get everyone to leave the house together … a bratty little uninformed person who practices raising an eyebrow as a hobby … [and] a girl person who would just like everyone to leave her alone by the window…” (7) – would make for an interesting story.  Her strange story begins within a story, since she came into this world believing she was a character in a book, and so she’s spent her whole life narrating her days, both as a way of being and a means of coping “here is a girl with a mind full of worry and a stomach full of carrots”(84).  If her life were a story, she’d know how to deal with the things that worry her:  being abandoned by her only friend at the start of 7th grade, since he’s decided he wants to be a “hipster” and doesn’t need her anymore; a group of bullies at school who’ve chosen Mysti as their favorite target; caring for her mama and little sister during her father’s long-term hospitalization; and the fact that her mama never leaves the house.

Mysti spends a lot of time thinking about her situation, her family, and their problems.  She thinks about change, making plans, and what, if anything, it’s in her power to do to help.  When she looks at each of the worries and troubles she has, even though she’s afraid and unsure if her plans will really help, Mysti realizes that making one decision, taking one action, is all she ever has to do:  “Here is a girl with the shaky sensation of having a foot on two boats. She must quickly decide which way to jump before the expanding water makes the decision for her and she falls into splashy doom.” (155).  Slowly, sometimes painfully, Mysti makes a strong new friend,  stands up for herself against her former-best-friend-turned-bully, ventures out on her own to get groceries and necessities for her family, and even faces her biggest fear at school: the annual talent show.

I loved Mysti’s honesty, vulnerability, and especially her ‘one-choice-at-a-time’ courage.  Karen Harrington has created a rich, lovable, intensely human cast of characters in Courage for Beginners, who teach us all that we each already possess everything we need to face the challenges and obstacles life throws our way.  With Mysti’s courage as an example, we can repeat after her, and believe for ourselves: “here is a girl who will get where she needs to go on her own two feet.” (289)  Amen.