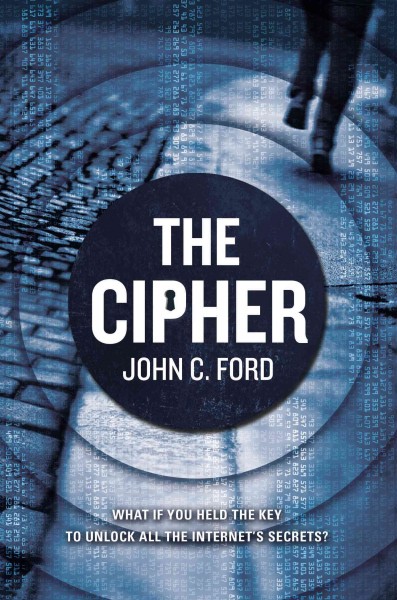 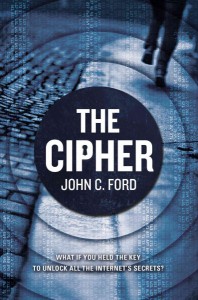 I love a good con.  Movie, TV show, book – it doesn’t matter, really – whatever the media, when the wool is pulled over someone’s eyes (especially when we thought we were on the look-out), it’s a genuine thrill.  I’m especially enraptured by the reveal: going back through those moments of deception, misdirection, and nuance when, now that it’s being laid out in plain sight, I wonder at how I (and the mark) could have been so blind.  But that’s all part of the fun, the lure, and the draw to this genre, isn’t it?

Returning in Spring 2015 with his sophomore YA effort, John C. Ford brings us a wily con cloaked in a techo-thriller entitled The Cipher.  At the intersection of modern cryptography, big business, the NSA, and the ne’er-do-well son of a genius billionaire, a tidy little mystery awaits, full of twists, turns, blackmail, revenge, and murder. The premise is disturbing real, the characters are reminiscent of  people you know in everyday life, and the secrets that are unearthed are unsettling to say the least.

The mark, Robert (Smiles) Smylie, Jr., is a likeable, but unambitious guy.  Kicked out of prep school, living on his own in crappy apartment near MIT, he’s been looking forward to today, his 18th birthday, when his $7 million trust fund is available to him.  His dad, Robert Smylie Sr., a mathematical genius, created the dual key encryption systems that make almost all secure internet transactions possible.  Next to his famous father, and the other brilliant people in his life, Smiles feels pretty worthless – he knows he lacks ambition, direction, and any thought for his future – but it’s easier to just go with the flow and pretend like he doesn’t care.  Complicating things, however, is the fact that his dad’s got terminal cancer, his beloved step-mother has recently died, and Smiles’ is on the outs with his girlfriend.  With nothing better to do, Smiles tags along with his genius neighbor, MIT student Ben, to a Mathematics conference at an Atlantic City casino, intent on teaching Ben the finer art of counting cards, and hopefully winning big at the tables.

When Ben has a flash of insight at the conference, however, Smiles realizes he’s got a real chance to prove himself as more than a trust fund slacker: Ben’s cracked an impossible code and Smiles figures he can both protect Ben from NSA agents lurking in the conference’s shadows and make some serious cash for himself and Ben by selling the digital cipher Ben’s written.  It doesn’t take long, though, for things to spin dangerously out of control, unearthing a shocking cover-up from Smiles’ family’s past and driving him towards a showdown that’s a lot more thrilling and dangerous than anything he (or the reader) saw coming.