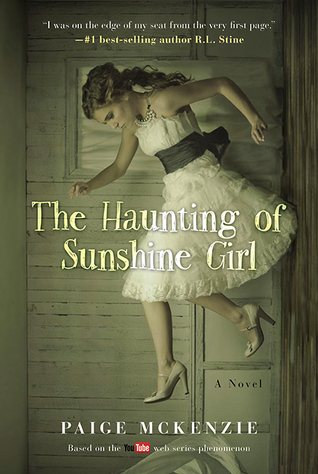 The Haunting of Sunshine Girl

Around the world, youth celebrate a rite of passage into adulthood, a time when they leave behind the behaviors and beliefs from childhood, unlock their potential, and enter the world as fledgling adults.  When and how this transition occurs depends on where adolescents live and in what cultures they grow up.

Paige McKenzie, with Alyssa Sheinmel, writes the story of one such transition in The Haunting of Sunshine Girl.   This first book in a paranormal series based on the YouTube sensation asks the question: What if, when you turned sixteen, everything you thought you knew about the world shifted?

A week past her 16th birthday, Sunshine Griffith moves from Austin, Texas, to Ridgemont, Washington, when her adoptive mother Katherine receives a promotion as a neonatal nurse at Ridgemont Hospital.  Although Sunshine supports the move for her mother’s sake, she’s not convinced that the move presents an opportunity for her, since it means she will be separated from Ashley, her best friend since 7th grade.  Still, the two vow to stay in touch, sharing their lives with one another via texts and phone calls.  If their friendship could survive the cliquey-ness of middle school, the girls are convinced that it can survive a few thousand miles.

Sunshine, who has always felt a bit like a misfit, considers herself old-fashioned and wonders if she wasn’t Jane Austen in a former life.  She prefers film to digital photography and loves vintage fashion, taxidermied animals, and books written two centuries ago.

Ashley, on the other hand, is more interested in contemporary fashion, lying around the pool in her backyard, and flirting with Chris Cooper.

Life in Ridgemont is gray, gloomy, and shrouded in fog, and the Griffith house smells of mildew and feels creepy to Sunshine, who senses a perpetual chill.  When Sunshine hears footsteps and voices in the house, her mother—who prefers science to fairy tales—tells Sunshine to stop spouting haunted house and ghost nonsense.  Although Ashley is equally skeptical about Sunshine’s concerns, the Griffith’s dog, Oscar, and their cat, Lex Luthor, sense something unusual.

By the time school begins, Sunshine has become a student of the spirit world, but soon she finds herself looking forward to Visual Arts class because of Nolan Foster, an honor student with a gift for research.  The two begin to research the paranormal world, which they discover is convoluted and complicated.  Because Sunshine feels creepy everywhere she goes, she wonders whether she’s a victim of seasonal affective disorder.  Nolan believes she’s a paranormal superhero, a light-bringer, an ancient mystical warrior.  Sunshine just wants her life back.  However, when it appears that her mother has been possessed by a dark spirit, Sunshine is forced to figure out who she is and why she’s here.