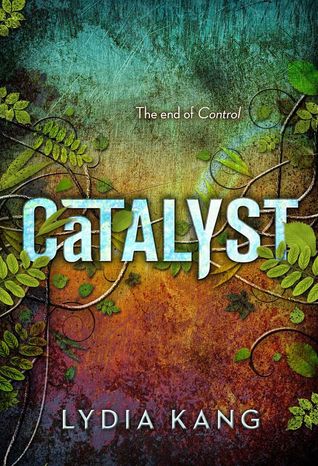 By: Donna
In: Sci-Fi & Fantasy (YA)
Tagged: genetic manipulation

For years, science fiction authors have been asking big questions like, Are humans meant to play god with genes?  By 2151, the world is a strange and different place, not unlike that revealed by Aldous Huxley in Brave New World or that created by Orson Scott Card in Ender’s Game.  Lydia Kang’s science fiction series Control ends w 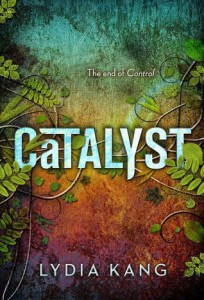 ith the novel Catalyst, where readers learn who, what, and why traited children were created and the idea of genetic manipulation promoted.

As the novel opens, eighteen-year-old Zelia Benten lives in Neia (geographically near present day Nebraska and Iowa) at Carus House, where silence is frightening and alone is a four letter word.  She shares this safe house with other illegals who have been banned because they carry an aberrant DNA and are believed capable of poisoning the gene pool.  Since government officials and many other members of society believe these mutant criminals should be purged from the earth, they favor HGM 2098, which outlaws genetic manipulations of human DNA and DNA marketing where people are valuable for their traits.  Traits like the regeneration or longevity gene, the trait that Zelia possesses, are most sought, but Aureus really desires the codes to the illegal genes, so that they can create people with multiple traits or so they can weaponize different concoctions.

At this time in the future, science rules, and children grow up proficient in the lab, inventing quick-healing elixirs or products that allow the user to grow thick, armor-like skin in a day or to stay awake for days without harmful effects.  These products are promoted by Aureus, but now the world is afraid that altered DNA is a credible threat and that someone might sneeze mutant DNA and infect the population.

Although she exists as a result of this advanced science, Zelia resists its power, believing she is not a commodity.  Still, her family—genetically and biologically distinct from normal humans—will die out if they can’t procreate or if they’re not allowed to exist.  Because of greed and a hunger for power, some politicians are eager to use the children as products, breeding them not for humanity but for their traits.

Despite that Zelia’s DNA never degrades, her Kryptonite is Ondine’s Curse, a life-threatening congenital disorder manifesting as a high-stress or sleep-associated hypoventilation.   Other weaknesses include her tendency to think with her heart and not her head, and recently, she wonders whether her mother, who was supposed to have died after Zelia’s sister Dyl was born, is still alive.  After all, in this century, science can manufacture truth with neural implants or fake hologram feeds which repeat the lies so frequently they become reality.

Zelia yearns for a world beyond these plastic versions of truth and happiness. For Zelia, running and hiding does not equal safety.  In order to achieve freedom, once and for all, Zelia will have to do what she loathes, manipulate three of the simplest human emotions: greed, sympathy, and fear, using them like weapons.  Zelia must also exude confidence and use intimidation, two character traits that don’t come naturally to her.

On her mission to solve mysteries and to save traited children from exploitation and extinction, Zelia learns important lessons:

Besides these important lessons, Kang’s novel exposes readers to other possible truths: that procreation is the closest that humans get to divinity and that different isn’t a defect.  Although in some ways the different represent an anomaly, in other ways they are the same.  While Zelia is a genetic aberration, she loves poetry and chocolate, idolizes her mother and Marie Curie, hates peanuts, and thinks high heels are torture. In addition, just like any other adolescent, her heart shatters when she loses the people she loves.