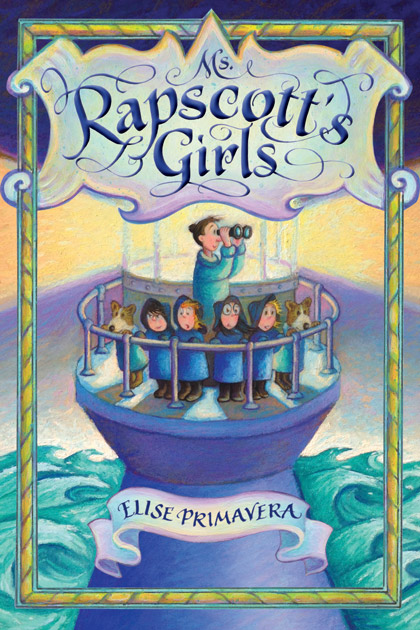 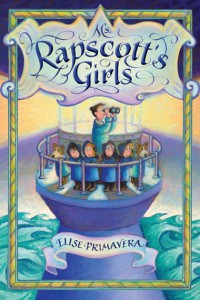 On a perfect day for getting lost on purpose, the story of Ms. Rapscott’s Girls by Elise Primavera begins in pictures.  Although they are perhaps not as sophisticated, the drawings remind the reader of those in The Invention of Hugo Cabret written and illustrated by Brian Selznick, who also uses pictures to carry the story line artfully forward.

Because it shares mystery, magic, adventure, and satirical issues about parental involvement, Primavera’s story can be compared to Lemony Snickett’s Series of Unfortunate Events.  Young readers will likely find the eight-year-old characters interesting in their familiarity.  Although the girls have been called loud, lazy, foolish, or unable to do anything right, Ms. Rapscott sees something in them that their parents or caregivers are too busy to see for themselves.  Beatrice Chissel has pluck, Mildred A’Lamode reveals enthusiasm, Fay Mandrake possesses an adventurous spirit, Annabelle Merriweather is brilliant, and Dahlia Thistle—although a late bloomer—exhibits self-reliance.

The story’s protagonist is actually Ms. Rapscott, who provides a stand-in for the girls’ absent parents.  With her stern but whimsical ways, she teaches the girls about truth, wisdom, love, passion, enthusiasm, luck, and abundance.  That Ms. Rapscott has survived her own beginning with parents who never had time for her also gives the girls hope.   Together, they learn how to be like a good cup of cloverleaf tea—strong but never bitter or tepid.  They also learn many other life lessons, not only about hygiene and health but also about taking the road less travelled.  After all, “curiosity is always favorable to convenience” (155).

Just as girls might relate to the characters at the Great Rapscott School for Girls of Busy Parents, boys will find familiar faces among the students at Mount Everbest’s Academy for Boys of Busy Parents.  From this book, readers realize that although children may be known for certain behaviors or idiosyncrasies, their gifts should give them worth beyond any obvious shortcomings.  In this way, Oscar, who is thin and pale and known for being sickly, can be valued for his natural-born explorer aptitudes, or Reggie, who is known for holding his breath until he turns purple, can be recognized for his sympathetic nature and his tireless defense of the downtrodden.

In three short weeks, Ms. Rapscott—along with her two corgis, Lewis and Clark—teaches the girls how to survive when life doles out its countless difficult tests.  She doesn’t succumb to what the girls want but gives them what will do the most good.  Like the color pink, the color of hope and love but also a little silliness, Ms. Rapscott gives them self-confidence while also modeling the importance of attitude.  Through her positive manner, Ms. Rapscott imparts perhaps the most important life lesson of all: While we may not be able to control what happens to us, we can control our attitudes.  With this approach to life, we master change rather than allowing it to master us.