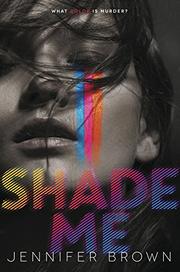 Given that her father is the famous Hollywood producer, Bill Hollis, Peyton Hollis is afraid she’ll be paparazzi fodder for the rest of her life, living behind a glam façade—all “dazzle and dysfunction, spritzed with expensive perfume” (1).  No longer wishing to associate with her family, whose money can buy secrecy, shroud scandal, and make them untouchable, Peyton has chosen life’s default setting, WEIRD.  When she discovers unsavory family secrets, she moves out of Hollis Mansion, hoping to escape the unrelenting, high pressure lifestyle of the rich and famous.  Getting more than she’s wishing for, Peyton ends up hospitalized, the victim of a violent assault.  Before she is attacked, though, she reaches out to Nikki Kill, a person with whom she has rarely socialized at Brentwood High.

When Nikki receives a phone call in the middle of the night from an unknown caller, she shrugs it off as a possible prank from her ex-boyfriend, Jones.  But when she gets another phone call from the hospital to identify a Jane Doe, whose phone had only one contact—hers, Nikki is too curious to avoid the summons.

Tragedy has defined life for Nikki, who—at age eight—lost   her mother, a victim of a mysterious murder.  Because Nikki has never come to terms with her mother’s tragic, unsolved murder, she struggles to find school useful.  Instead of chemistry, math or Western Civilization, Nikki thinks a class that teaches a person “how not to become a bitter, mistrustful ball of numb when life shits all over you” (15) would be useful.

School has also been a challenge for Nikki, for whom words and numbers take on a stunning hue, making concentration difficult.  Because of this unique neurological condition called synesthesia, Nikki additionally relates colors to emotions; for instance, fear is bumpy gray and black, and lust is violet.  But most often color equates itself with negativity for Nikki: “sadness, death, worries, stress, bad grades, [and] feeling like an outcast” (350).

A senior now, Nikki is on academic probation and in jeopardy of not graduating, but she abandons preparations for her chemistry exam to sit at Peyton’s bedside.  Unsure what exactly has drawn her to this comatose girl who is barely clinging to life, Nikki feels a kinship with Peyton and vows to find her attacker—despite the crimson that pulses from Peyton and reminds Nikki of her own mother’s death.

As Nikki searches for the missing link in Peyton’s attempted murder, Detective Chris Martinez—who is motivated by his own ghosts from the past—wants to protect Nikki, who begins to wonder whether she is following clues to nowhere or whether she will discover the attacker’s identity.  Her detective work leads her to several suspects: Arrigio Basile, a cane-wielding thug with connections to drugs and prostitution; Luna Fairchild, a lying, jealous, and vindictive half-sister; Gibson Talley, the lead guitarist for the punk band Viral Fanfare who wants his rights to Peyton’s intellectual property as the group’s songwriter; even Dru Hollis, the rich, rugged, and sexy older brother who reeks of adventure and influence.  Peyton has attracted any number of enemies, given her status as rich and popular, a status that made her an easy target for her peers’ hatred: “People killed themselves to put you up on a pedestal, just so they could watch you lose your balance and fall, and even pull you down when you weren’t falling fast enough” (38).

When Nikki isn’t sitting vigil at Peyton’s bedside where she is reminded of her own demons, she alternates her time in the field investigating with visits to the gym, sparring and conditioning so that she can block out the colors that swirl with her curiosity and intuition, threatening to swallow her.  Time spent at LightningKick, the tae kwon do academy, centers her and makes her feel strong, powerful, and capable.  It also sharpens her self-defense skills.  Although she can’t score an A on anything in school, she can “kick the ass of a grown man without breaking much of a sweat” (54).  Her kyo sah nim, Gunner serves as another parent-figure for Nikki, who more than once needs those sharpened skills to defend herself in her detective work because none of the players in this drama are quite who they seem to be, and several are eager to kill Nikki’s curiosity or even Nikki herself.  Wondering whom to trust, since past experiences have taught Nikki that love and trust get a person killed, Nikki finds herself spending considerable time sifting through the evidence to detect truth from lies.  An excellent secret keeper herself, Nikki considers several of the leads utterly preposterous, as the reader follows the clues to the novel’s surprising conclusion, a conclusion that answers some questions but leaves plenty unanswered for future episodes in Nikki’s story.

Shade Me by Jennifer Brown is the first book in what promises to become a thrilling suspense series about Nikki Kill.  In this first installment, readers are not only drawn in by the action and intrigue featured in the plot but by the character, Nikki.  The title works on multiple levels, as the independent and tough main character still looks for protection from her psychological trauma of the past.  Nikki also seeks relief from the pressure that comes from her synesthesia since she knows intimately how pressure can make a person do strange things that don’t engender pride.