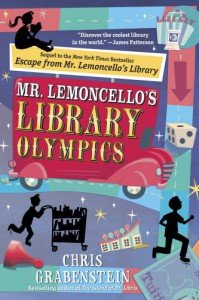 The somewhat clichéd stereotypes and the questionable caricatures in Mr. Lemoncello’s Library Olympics by Chris Grabenstein are offset by creative riddles, rebus puzzles, word scrambles, challenging vocabulary (think Lemony Snicket), and rich allusions to everything from famous aviators and legendary librarians to the Beatles and NASCAR.  The book also ignites the imagination and invites critical thinking about the issue of banned and challenged books and about the purpose of libraries.

Because this book is a sequel to Escape from Mr. Lemoncello’s Library, it features some of the same characters, including Kyle Keeley, an ordinary twelve-year-old with a passion for video games, the longest to-be-read list, and a fear of intense pressure; and Mr. Luigi Lemoncello, an eccentric billionaire with a penchant for wacky games, ludicrous costumes, and the knowledge, joy, and wonder of books.

In this epidsode, Kyle, along with his teammates—Akimi Hughes, Sierra Russell, and Miguel Fernandez—faces off “against the top library nerds in the country” (34) in the Library Olympics.  The competition, which features twelve games in a duodecimalthon (like a decathlon that sounds like Dewey decimal system), not only poses a threat to Kyle’s champion status but also to the library itself when the games get sabotaged by Charles Chiltington and his mother’s League of Concerned Library Lovers who claim to have the best interests of the Alexandriaville (a clever allusion to Alexandria) Public Library at heart.

In her efforts to thwart Mr. Lemoncello and his belief that libraries should be places of fun, innovation, and unpredictability, Mrs. Chiltington bribes one of the players, Marjory Muldauer, a “scary good” competitor from Bloomfield Hills, Michigan, who knows Dewey decimal codes down to the 1000ths place and uses the code to order such things as coffee, 633.73, or doughnuts, 641.8653.  Will Marjory—who believes libraries should be “all about order, control, precision, and predictability” (148)—skirt the rules, remove a certain book, and get Mr. Lemoncello to leave town? Or will Kyle and his intellectual freedom fighters save the library from becoming just a fancy domed building with dry and dusty books?

The book finds its resolution after several interesting plot twists, as Grabenstein cleverly recreates a potential book burning and threatens “freedom of speech, freedom of expression, and freedom of fun” (258).