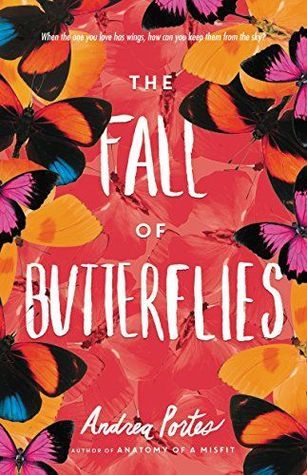 The Fall Of Butterflies 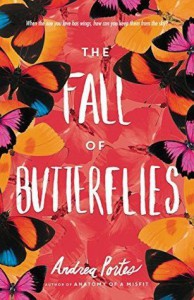 Willa Parker’s life is becoming one all about “should’s” and “supposed to’s” and it’s all her mother’s fault. Willa is a junior in High School, not exactly happy with her spot at the Freak Table, but she’s also not complaining. She’s content with her social standing and the life that she’s built with her dad in the small town of What Cheer, Iowa. Her mother, living in Paris after deserting Willa as a child, has other plans for her, though. These plans involve Willa having to move to the East Coast to attend the uber-exclusive Pembroke Prep, leaving her friends and her father behind to do what her mother says she’s “supposed” to do.

For Willa, this is the last straw. Her slight disappointment with life becomes a full-on depression and she doesn’t plan on letting her mother control her life for much longer. So far, her plan is simple.

She doesn’t think her plan out with too much detail, unsure what life at Pembroke will allow, but she’s determined to go through with it.

This all changes when she meets the infamous Remy Taft. Remy is a student at Pembroke, the student, as far as everyone there is concerned, and she immediately takes an interest in Willa. Willa is shocked, shocked that this girl who “deserves Zapfino font. And all caps” could like a simple girl from Iowa (35). As Remy explains, that’s exactly what she finds appealing. Willa isn’t tainted by society’s standards and she doesn’t judge based on wealth and status. She takes Remy as she is, and because of this, the two become inseparable.

However, Willa quickly learns that this friendship comes with a price. Remy pulls Willa into a world of super-elites who expose her to things she’s not exactly comfortable with, namely alcohol and drugs of all kinds. Remy turns out to be an addict with all the right sources. As she and Willa grow closer, Remy begins to spiral under the pressures of the expectations held for her. As much as Willa tries to help, it often seems like Remy doesn’t want saving, and Willa is left with a difficult choice to make. Does she take a step back to save herself, or does she follow Remy down? How far could they fall?

Andrea Portes, critically-acclaimed author of both adult and young adult fiction, raises many different questions in The Fall of Butterflies. What are the costs of love and friendship? How much can someone take before they break? Portes explores these themes and more from Willa’s sincere, almost naïve perspective. Through this story of two girls and a fractured friendship, Portes shows that no life is perfect. “Sometimes life doesn’t get to be movie. Sometimes it’s just weird and unsettling” (351). Portes’ novel is weird and unsettling in its own way, but that’s what makes its complexities shine. As Willa struggles to reconcile what she should do with what she wants to do, it becomes clear that there is no right answer. Portes’ novel doesn’t skim over the harsh realities of teenage angst and that’s why it feels so real.