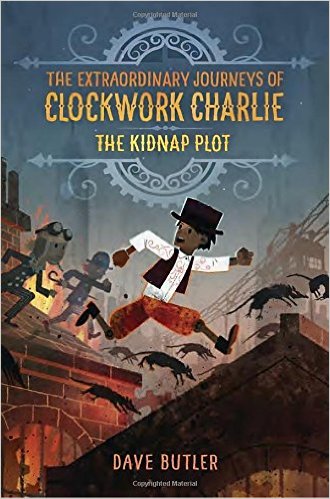 The Extraordinary Journeys of Clockwork Charlie: The Kidnap Plot 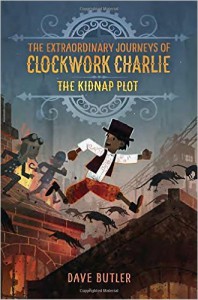 Charlie’s father has always told Charlie that he’s a very special and fragile boy.  Protective of his son, Rajesh Pondicherry is a creative inventor and designer of various mechanisms in 1887 London.  Because Charlie has special needs and no mother, his bap doesn’t allow him to wander and doesn’t like him to spend too much time outdoors.  These limitations make Charlie an avid reader of adventure stories and the Almanack of the Elder Folk and Arcana of Britain and Northern Ireland by Reginald St. John Smythson.  Charlie’s vocabulary and imagination grow under the influence of this reading, which further teaches him about kobolds, trolls, dwarfs, shape-shifters, pixies, and ghouls.  Charlie is also fond of the stories Bap tells him about the East India Company and what life was like in the Punjab region of India.

One day, when Charlie sneaks into town, he encounters a man on Irongrate Lane who is looking for his father’s shop.  Convinced the man is sinister, Charlie eludes him.  But the Sinister Man eventually arrives at the Clockwork Invention and Repair Shop, tears the place apart with help from hulders who talk about the Iron Cog, and kidnaps Charlie’s bap.  Charlie, who was hiding on orders from his bap, finds broadsheets left behind, papers which speak about the Anti-Human League.

Now, Charlie must solve the Iron Cog mystery, determine the purpose of this Anti-Human League, discover the identity of the Sinister Man, and rescue his bap.  Not a fighter but still a spirited boy driven by loyalty, Charlie recruits help: two orphaned chimney sweeps, Ollie and Bob; as well as a kobold named Henry Clockswain, a troll named Grim Grumblesson, and a pixie named Natalie de Minimis—aka Gnat.  Together, the eclectic group encounters a number of adventures of their own, adventures that nearly get them killed by rats, by men with cutlasses, and from a variety of other mishaps—both human and mechanical.  As they continue to take heroic risks, they all learn something about the sacrifices that define friendship’s depth and about doing the impossible.  Each also unveils a secret identity, revealing different layers of reality and making surprising discoveries about self and one another.

Written in a steam-punk style, the first book in what promises to be a series, The Extraordinary Journeys of Clockwork Charlie: The Kidnap Plot by Dave Butler asks some philosophical questions while also sharing details about the history and geography of early London.