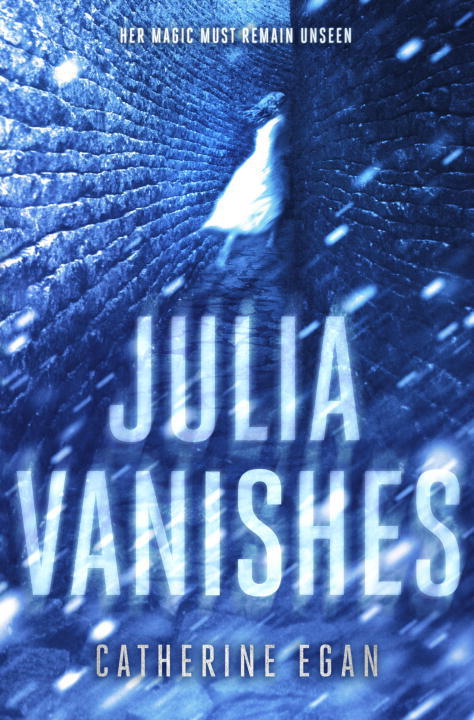 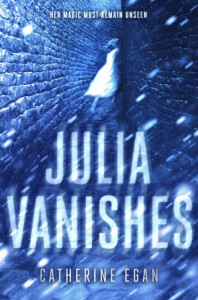 With a recent surplus of fantasy novels for young adult readers, it’s rare for one to be completely unique. Catherine Egan’s Julia Vanishes manages to stand on its own, both delightful and surprising, while building a one-of-a-kind, magical world.

The story focuses on Julia, currently serving as a housemaid for the wealthy Mrs. Och’s household. Julia serves tea and cleans sheets, but in actuality, she’s really a spy. After her mother was killed in a government raid against witches, Julia and her brother were taken in by Esme, the leading lady of crime. From Esme’s troop of criminals, Julia’s perfected the arts of thieving and spying. While the criminals all have talent, Julia’s is out of the ordinary. She’s no witch, with the power to cast spells using just pen and paper, but her gift is certainly magical. “There is a space I can step into, a space between being myself in the world and I know not what, where people’s eyes simply pass over me, as if I were a piece of furniture so ordinary they barely take it in” (7).

Julia didn’t grow up intending to be a high-class criminal, but she is now “the best thief and spy this wretched city has ever known” (279) and, well, “crime pays” (45). She’s been hired now to use her talents to spy on the people and on goings of Mrs. Och’s manor, offered great rewards for uncovering any secrets that she finds. The trouble is that now that she’s discovering more, she’s left with only more questions. What monster howls through the night behind the locked cellar door? Why does the visiting professor have illegal books about magic and folklore in his study? And why is it that Mrs. Och can see Julia when she doesn’t want to be seen? As Julia learns what the household is involved with, she must make choices that will change her life and endanger everyone that she knows. This isn’t exactly what she signed up for.

Julia Vanishes is surprising in the best possible ways. As the first novel in a series, there is plenty of world-building for this Victorian-esque setting where magic is real but punishable by death. Catherine Egan provides enough background to this society for readers to feel comfortable moving forward without taking away from the quickening pace and unfolding plot. Not only is this setting so intriguing, the characters are also treated well, each given depth throughout the novel. Julia’s adventures involve criminals, scholars, witches, and even monsters. With all of these characters, Egan does a satisfyingly good job of balancing the many different relationships with her shifting storylines. All of this results in the sort of book that will draw you in from the first chapter and keep you engaged until the very last word. Julia Vanishes is a magical, mysterious, and suspenseful novel that sets incredible groundwork for the rest of Catherine Egan’s The Witch’s Child Series, meaning much more is left to come.