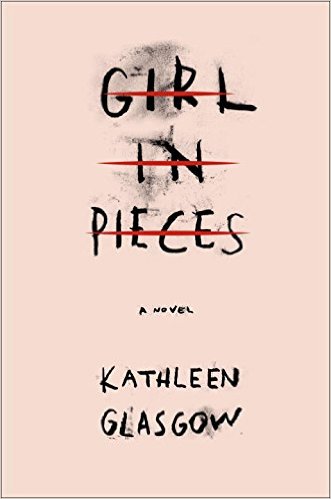 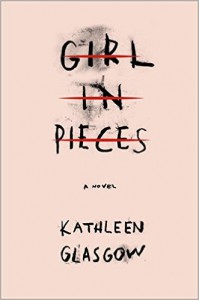 When coping with emotional turmoil, our subconscious often takes us away as a kind of protection.  In the event that disassociation doesn’t occur, we find other ways to deal with or to control deep psychological pain.  Because physical pain can cancel out emotional pain, some people resort to self-harm to feel a sense of control over an otherwise uncontrollable situation.  This external way to express inner turmoil distracts the sufferer from painful emotions or helps the person who self-injures to actually feel again.

Inundated with impressions of horror and hiding those impressions until they are unbearable, Charlotte Davis, the seventeen-year-old protagonist in Kathleen Glasgow’s debut novel, Girl in Pieces, chooses self-harm to release her demons and because hurting herself makes her feel better: “I need to hurt myself more than the world can hurt me, and then I can comfort myself” (42).  When there are too many people in her head, she claws at her body to get them out, “to peel out the blackness spreading inside [her]” (342).

A girl fragmented by a traumatic past, Charlie hopes to cut out memories of her deceased father, her abusive mother, and her best friend Ellis—a girl lost to drugs and a nearly successful suicide.  With Ellis, “the world was coated in gold” (71); without Ellis, the world is a cold, dark, and unfeeling place.  A force field of anger, loss, and fear, Charlie wants to cut out hunger, sorrow, fatigue, and all the men who have sexually abused her as payment for shelter from the streets.  Feeling unloved, unpretty, and unnoticed, Charlie attempts to cut out all the negativity and overwhelming pain; she cuts until her body is a map of scars, pain, and shame.  She cuts until she nearly kills herself.  Now she’s institutionalized and unresponsive—a selective mute like Melinda Sordino from Speak by Laurie Halse Anderson; broken like Kristina in Ellen Hopkins’ Glass.

At Creeley Center in Minnesota, Charlie meets girls like her: Blue, who taunts her and calls her Silent Sue, one of the Bloody Cupcakes; and Louisa, who calls her “little one” and comforts her.  She also meets Casper, her therapist who teaches her how to heal: by starting small, taking one goal at a time and seeing it through.  With Casper’s help, Charlie begins to recognize the triggers to her psychotic episodes: “being overwhelmed, feeling powerless, getting caught up in the tornado of shame and emptiness” (140).  In Creeley, Charlie makes positive progress with breathing techniques, anger management strategies, and her sketchbook.  Drawing what she cannot say, her art becomes her words. Through art, Charlie makes herself matter.  Although she is eventually released into her mother’s care, Charlie escapes to Tuscan, Arizona, to stay instead with her friend Mikey.

In Tucson, Charlie finds an apartment and a job and begins to think she might be a “real girl.”  Pulled in by desire and the feeling of being wanted, she gradually falls for Riley West, a twenty-seven year old addict and former musician, who also works at the same diner. Vulnerable and insecure, Charlie soon collapses into the comfort of old habits—trying to fill the emptiness with kissing, sex, alcohol, and drugs.  Full of hell and sinking in an ocean of hurt and shame, Charlie requires rescue once again.

This book, written by an author who knows first-hand what it means to be swallowed by memory and regret, has the power to help others who experience Non-Suicidal Self Injury (NSSI) behaviors.  Readers also confront the realities and stresses of poverty while also realizing how art—whether drawing, playing music, or writing—gives power to the voiceless.  Art has the potential to teach us about being in the world when we don’t know how to be.  As Charlie learns the importance of just being, she stumbles but begins to reassemble her fragmented pieces, fitting them together and making them stick.  Artists Ariel Levertoff, Tony Padilla, and Felix Arneson each give her some insight into her Kiefer stage, the stage “when we want to destroy ourselves in order to create.  To see if that’s beautiful, too” (200).  With their tutoring, Charlotte—the girl who writes her pain on her body—examines herself and finds a voice in her art.