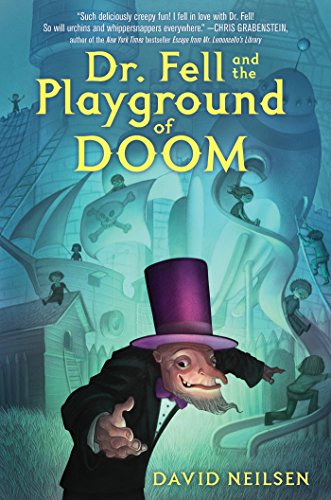 Dr. Fell and the Playground of Doom 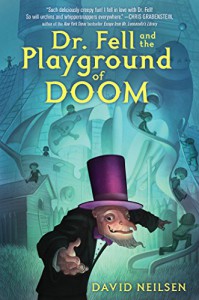 David Neilsen is a professional teller of spooky, horrific tales for all ages. For his first novel, Dr. Fell and the Playground of Doom, he’s chosen to stick to what he’s good at. Intended for readers between the ages of 8 and 12, Neilsen offers a quirky, uniquely chilling story that provides an engaging and suspenseful read for everyone, especially if you are afraid of going to the doctor.

It all starts when someone buys the abandoned house on Hardscrabble Street. It’s a house “of imagination, a blank canvas just waiting to be painted with the gleeful brushstrokes of youth” (2). The kids from the neighborhood have been playing in and around the house for years, so when Gail Bloom, her brother Jerry, and her best friend Nancy Pinkblossom, find out that it’s been bought by a mysterious doctor, it’s bad news for everyone.

Dr. Fell is the oldest doctor they’ve ever seen, and he certainly dresses strangely, always in black with a large, purple top hat on his head. Despite giving Gail, Jerry, and Nancy the creeps when they first meet him, he readily gains the love of the town by building a playground in his front yard. It’s quickly apparent, though, that it is no ordinary playground. It has a star fighter cockpit, undersea ruins, a roller rink, and many more magical, impossible areas of play. Even though Dr. Fell is probably the spookiest old man ever, the neighborhood children all love him and his playground. Daily, they run into “the waiting arms of the play structure, which swallows them up like some diabolical children-eating sponge” (97).

Gail, Jerry, and Nancy are the first (and only) ones to realize that Dr. Fell and his playground are up to no good. More and more kids are getting hurt while playing and most of them are doing it on purpose to get Dr. Fell’s attention. “It was almost as if the more times you hurt yourself, the more popular you became” (115). The three friends set out to spoil Dr. Fell’s plans, whatever they might be, and discover that he is far more dangerous than he seems.

This novel, while chilling, is never outright scary, something that will keep young readers engaged in this distinctly original story. Dr. Fell and the Playground of Doom has a lot of things, humor, suspense, and friendship, but it also explores fear in an entertaining fashion. After all, “facing a childhood fear can be tremendously difficult, particularly if you are a child” (169).