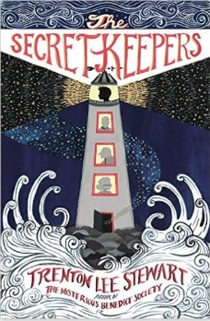 Keeping secrets can lead to danger, and danger gives life to fear, but fear can sharpen you and make you stronger.  Under the influence of fear, the challenges you encounter can, in fact, help you to grow into your best possible self.   These are the truths that eleven-year-old Reuben Pedley learns in Trenton Lee Stewart’s new release S 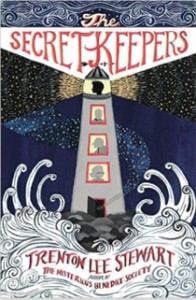 In many ways, Stewart’s book parallels The Invention of Hugo Cabret by Brian Selznick; the main character, whose father is also dead, is a thief of sorts with an interest in clocks, although not for the same reason.  Reuben, too, must solve a mystery which began several generations back.  Stewart’s 561 page book is likewise illustrated with several drawings, although they don’t equal those of the 2008 Caldecott Medal Winner, nor, do I suspect, they were intended to imitate Selznick’s historical fiction account.  Stewart’s book stands on its own as a good mystery, sprinkled with magic, secrecy, and plenty of adventure.

Reuben is a shy boy, happiest when left to roam on his own.  On a typical summer morning, as he is “walking backward into the sky” (9), Reuben finds a peculiar watch in an ornate case.  His first thought is to sell the watch for a grand sum, to contribute to his family’s impoverished income.  His mother already works two jobs, and the two live in one of the poorest sections of New Umbra called the Lower Downs.  Money from the watch could allow them to live more comfortably.

Adding to their austerity, citizens of New Umbra are under the thumb of Cassius Faug, called the Counsellor, who reports to The Smoke—a boss reminiscent of The Wizard of Oz, a mysterious and reclusive formidable ruler.   A terrible and powerful figure, The Smoke works like a crime boss, and his minions—called the Directions because they always work in fours—collect profits skimmed from business owners and wander the city, ever watchful.

As Reuben studies the watch and its idiosyncrasies, dreaming of riches, he discovers its secret—a secret he intends to use to his advantage.  “His mind flashes with briefcases filled with money.  Sneaky entrances and exits, . . . robbing a robber, thwarting a thief” (128).  Liking this new feeling of being different and special, Reuben has to decide if he’s bold enough for such mischief.  His secret-keeping leads to deception, and more secret-keeping, but Reuben is determined to learn something incredibly important—and potentially dangerous—about the watch without getting discovered himself.  With his quiet life disrupted, Reuben realizes that he is adopting the lifestyle of a spy.  His time spent exploring abandoned building ends up serving as an audition for his biggest heist.

Conflicted and afraid, Reuben’s new life is burdened with worry, guilt, and expectation of danger to come.  Although he doesn’t like deceiving his mother, his motivation to know the watch’s complete secret motivates him to stay the course, to solve the mystery.

His ally in this intrigue is Mrs. Genevieve, an elderly and eccentric woman in the watch repair business who is also über-intelligent.  She teaches Reuben that information is power, but she’d rather err on the side of caution than see Reuben take risks.   As the mystery unravels, Reuben finds two more allies: Penny Meyer, a ten-year-old red-head who is imaginative, loyal, intelligent, and willing to put her life at risk if the cause is just; and Jack, Penny’s older brother. who is an unrepentant liar but an honest man with a taste for adventure.

Together, the motley crew learns not only that the tension between longing and fear has strange consequences but that the solution to fear is boldness.  With bold measures, despite the uncertain and potentially terrifying outcome, the team believes in pursuing their important goal.