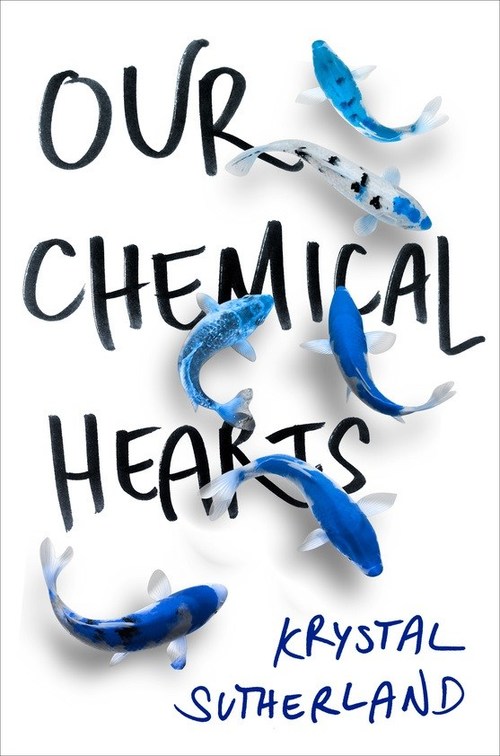 By: Donna
In: Realistic Fiction (YA), Romance (YA), Young Adult Book Reviews 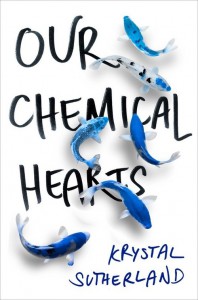 Love isn’t all emotion; it is also biology and chemistry, and according to Krystal Sutherland in her debut novel, Our Chemical Hearts, “all love is equal in the brain” (287).  Like hunger and thirst, love drives us to act, and satisfying that craving becomes a goal.  Although we tend to identify love most often with euphoria, that is hardly the only emotion we feel when under its influence. Ecstasy, compassion, surprise, anxiety, anger, jealousy, and despair, all play a role as the brain releases chemicals like pheromones, dopamine, and serotonin. Sutherland’s seventeen-year-old protagonist, Henry Isaac Page experiences these emotions as he swings between highs and lows, like a kite catching air streams, while tied to Grace Town by his passion.

These feelings are foreign to Henry, who, unlike the “testosterone-driven sex monsters” (5) of his school, hasn’t previously experienced an all-consuming love.  Although a decent-enough writer, Henry stumbles to express himself orally, and in Grace’s presence, he gets stage fright, his “brain turning into a cavernously empty pothole that [can’t] scrounge up useful thoughts to save itself” (51).

Added to this complication is Grace’s mysterious behavior.  Beautiful but damaged, in some ways Grace resembles serial killer Aileen Wuornos, made notorious because of the critically acclaimed 2003 movie Monster.  Grace’s Facebook profile shows a sexy blond, dressed in red and wearing a model’s smile, but in real-life, Grace wears masculine clothing, walks with the aid of a cane, and is often disheveled and gloomy.  Although Henry tries to reconcile the two versions—the one colorized, the other a sepia, “hard-to-grasp version, ghostlike and colorless” (31)—Grace remains oddly confusing and out of alignment with her surroundings.

As Henry gradually learns what has caused Grace’s transformation, he realizes that even though she is grieving and broken and depressed, she’s worth fighting for, even if the struggle results in collateral damage, to him or to Grace.  The more Henry pretends that Grace is “whole and full and happy” (174), however, the more he slides into a painful, Schrödinger’s cat relationship, one that is “neither dead nor alive because we had not been observed” (183).

When Grace occasionally slips into the Facebook version of herself, she immediately pulls herself back from the brink of happiness because she feels she deserves to be punished.  Like those who commit self-harm, Grace endures overwhelming pain as penance for her past and as a way to feel in control.

Like an addict who can’t help himself, Henry continues to crave Grace: “We had . . .  the type of love that would drown you if you waded into it too deep.  It was a love that tied little sinkers to your heart one at a time, until the organ was so heavy, it ripped right out of your chest” (288).

Readers will likely be impressed, as I was, with Sutherland’s ability to describe love so accurately, as the achingly, excruciatingly beautiful paradox that it is as it both fulfills and infuriates.  To further describe love’s—and life’s—effect on human beings, Sutherland uses two analogies.  The first comes in Henry’s “cabinet of curiosities,” a collection of pottery pieces in the Kintsukuroi (keen-tsoo-koo-roy) style.  Kintsukuroi, the Japanese art of mending pottery with seams of gold, becomes a metaphor for how the cracks and breaks in our lives have the potential to make us more beautiful.  With her metaphor, Sutherland suggests that although we experience unexpected knocks from life and drops from dizzying heights, Japanese pottery can teach us a lot about feeling flawed.   Despite the totally miserable feeling, there can also be a strange beauty in the way we process these occasions and the lessons we take from them.

The second analogy comes in Grace’s frequent references to the universe, to humans being “nothing but the ashes of long-dead stars” (62), and to oblivion’s power to exonerate us.  Astrophysicists do tend to agree that all the material in our bodies originates with stardust, residual material from remnants of stars and massive explosions in the galaxies. Not only do dead stars provide the building blocks of life, we all return to ash when we die.  In between, if we’re lucky, we experience the supernova that is love: the light and heat and explosive pain.

In addition to her creative use of figurative language—especially the extended metaphor, Sutherland is an expert in creating characters.  Besides Grace and Henry, who are central to the plot, Sutherland creates the secondary characters—Murray, Lola, and Sadie (aka Suds)—with artistry and depth.  Additionally, she is a master of allusion, infusing her novel with not only a plethora of pop culture references from Horatio Caine to Janis Joplin and Sully Sullenberger but references to literary artists like Cormac McCarthy and Pablo Neruda, who teaches us that love often occurs “in secret, between the shadow and the soul” (15).