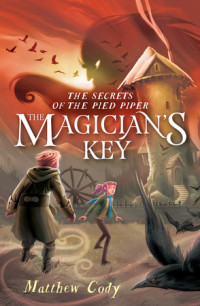 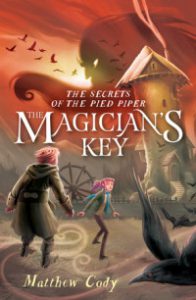 Readers who enjoy reading fantasy-adventure stories like the Fablehaven series by Brandon Mull or the Artemis Fowl series by Eoin Colfer will likely find pleasure in the Secrets of the Pied Piper series by Matthew Cody.

In The Magician’s Key, the second book in Cody’s series, thirteen-year-old Max Weber and her younger brother Carter are separated after the Pied Piper used Carter to free himself from imprisonment in the Black Tower.  What had begun as a quick research trip to German so that Max’s father could work on his new book turned into something stranger than fiction.  Now Max’s parents are missing, her brother is stranded in a magical land called the Summer Isle, and Max doesn’t know how to help any of them. Still, she does have the Peddler’s map, an enchanted map that reveals what the viewer needs to see.

Not unlike today’s global positioning systems, this map magically tells Max where she needs to go. With her companion, an elf named Mrs. Amsel, Max is trying to locate the cruel and evil magician Vodnik, who possesses the Key to Everything, which Max hopes to use to unlock the door to the Summer Isle.  Although the Summer Isle is fabled to be a place of magic, adventure, and eternal summer where time has no aging-effect, it is also a place of rat creatures, ogres, witches, and magical folk—some of whom may wish you harm.  By returning, Max hopes not only to rescue her brother but to bring home the lost children of New Hamelin.

Back on the Summer Isle, Carter is trying to locate the Piper’s lost pipe. The quests of both Max and Carter turn into a race against evil forces who wish to thwart them.  Max is trying to outrun Vodnik while Carter is racing against the rats and the Piper—no small feat for Carter, who endures a brace on his leg.  Because the rat brain is programmed for pillaging, biting, clawing, betraying, murdering, and stealing and the Piper is misguided, arrogant, dangerous, and perhaps insane, Carter has a daunting task before him.

With plenty of surprises and with unsuspecting allies along the way, both learn important lessons on their conflict-laden journeys, where strange becomes the new normal:

Through its paradoxes and allegories, its heroes and their struggles, and its magical creatures, Cody’s novel—like all good fantasy—actually reveals insight into what it means to be human.