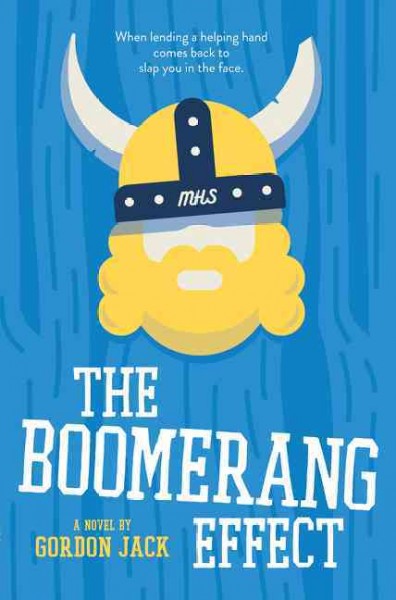 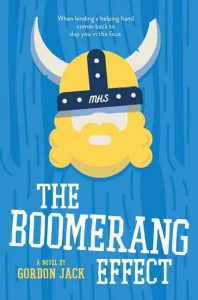 Despite his warm, friendly, and generous nature, junior Lawrence Barry is on the verge of expulsion for his actions at a diversity assembly at Meridian High School while stoned.  Because his father is a powerful attorney of the law firm Barry, Yu and Singh and because his counsellor Mr. Lunley believes Lawrence has potential and simply needs to channel his energies in more positive directions, the expulsion hearing is thwarted.   However, with his dad’s threat of Langdon Military Academy hanging over his head, with Mr. Lunley’s having recruited him for the Buddy Club, and with Principal Stone scrutinizing his every action, Lawrence has to reform his habits and discover what—besides pot and origami—brings him relaxation and joy.  He also wishes to be more like Odysseus, a man with a purpose, a man who “battles one-eyed giants and [has] sex with hot witch goddesses” (16).  Lawrence doesn’t realize, until about mid-plot of The Boomerang Effect by Gordon Jack, that he may have mistaken Odysseus’ recklessness for focused determination.

Realistic fiction at its best, The Boomerang Effect shares insight about the politics of school and about the complicated dance adolescents perform between wanting to stand out and simultaneously blend in as they search for acceptance.  Jack also addresses the agony of deprivation as Lawrence struggles with sobriety, which he interprets as an incredibly stupid choice that costs him his friends and sentences him to hiding in an empty house and watching soap operas with the family cook.

As a distraction from his craving to get high, Lawrence throws himself into his Buddy Club duties.  In the Buddy Club, a mentor program that pairs upperclassmen with new students, Lawrence is assigned freshman mentee Spencer Knudsen, a transfer student from Norway.  Initially, Lawrence approaches Spencer as a project, as a person who needs a new image.  He uses the same approach with Audrey Sieminski, a brave, imaginative, and independent young woman who disguises her curves with bulky sweaters and whom Lawrence hopes to help with her “look.”  From his misguided approach, Lawrence actually learns a good deal about himself and the unstable architecture of personality.  He also learns to critically question his understanding of what normal means: “I thought I was taking a boring piece of paper and making it look cool, when in fact, I was taking something cool and making it flat and generic.  It [is] the complicated and imperfect folds that [make] people interesting.  The last thing we should be doing is trying to iron them out” (282).

Like Jake, Reinvented by Gordon Korman, Along for the Ride by Sarah Dessen, and Prom by Laurie Halse Anderson, Jack invites readers to think critically about the prevailing philosophies that construct the social realities in which we all participate, sometimes without our awareness.  For its focus on a school’s implicit curriculum, Jack’s novel supports critical literacy development.  An ability to make thoughtful judgments, critical literacy also implies a skill for arriving at improved understanding; it involves an interrogation—

With such opportunity for rich inquiry, the emphasis of critical literacy is clearly not about skill acquisition, like detecting literary elements; however, Jack’s novel features abundant allusions, puns, and ironic examples of Lawrence’s helping hand coming back to slap him in the face and his emerging as a warty ogre in Fairyland, the school’s homecoming theme.

With all of its opportunities for tackling tough and touchy topics, I can easily see Jack’s debut novel opening relevant dialogue in the high school classroom.  Because young people live complicated and emotionally charged lives, I can also see The Boomerang Effect lending advice and a kindred spirit to any teen struggling with addiction.