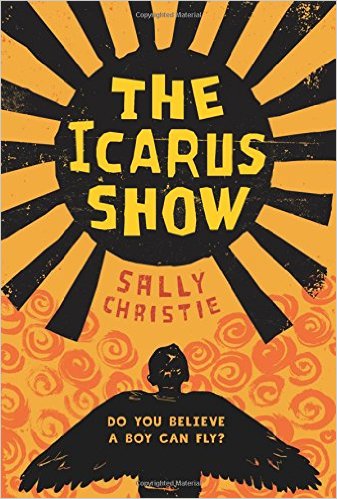 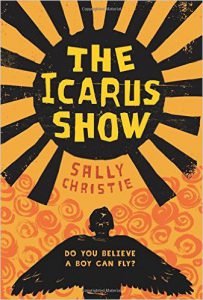 Alex Meadows has just passed from primary to secondary school in Lambourn, England, so he is constantly on guard to protect his status and to avoid being targeted by Alan’s Battalion, a gang of school yard bullies commanded by Alan Tydman.  Alex plans not to react to any of the gang’s bait since reactors get hurt, a truth that David Marsh can testify to when he refuses to fly under the radar.  But when Alex—and everyone else in his grade—gets an invitation to the Icarus Show, he dares to believe in possibility.  From the teaser campaign to the main event, Alex is intent on solving the mystery of a boy with wings.  Alan, however, is not directing the Icarus Show, which is robbing the spotlight, so retaliation is imminent.

Although The Icarus Show by Sally Christie shares some interesting truths for middle grade readers about bullies and the bullied and about how humans are at a disadvantage without details, it also raises some red flags.  For example, I don’t believe any person is useless, and I also took exception to Christie’s insinuation at one point that life may not be worth living.  These are not mentally healthy ideas for impressionable or vulnerable youth, especially in a book about attempting suicide.  Christie does redeem herself  when her protagonist discovers not only the drawbacks to his Trust No One policy but that instead of giving control to the unknown, we should make an effort to resolve parts of any dilemma.  Alex gains further insight when he chooses to get involved rather than to proceed with caution.

In addition to its allusions to the Icarus myth, Christie’s book raises awareness about suicide and how we can be blind to its symptoms, especially when they manifest in creative people.  Through her characters, she also asserts that bystanders are guilty of bullying, making readers aware that ally behavior, although risky, is the nobler action.  Alex makes these discoveries while he confides in his best friend Maisie, an elderly woman who struggles to cope with the loss of her husband, and while he develops a friendship with David, an adolescent who struggles to gain acceptance in a social system that doesn’t fully understand nor appreciate creative genius.

Although Christie’s plot doesn’t pursue the why of David’s actions, her book has potential to open the conversation about why creative geniuses are often undone by their gifts.  Because artists and other innovators often possess acute sensitivity in experiencing the world and because their sensations appear to come from another plane, these creative minds struggle to get others to see and feel as they do.  This inability to communicate may account for the anguish in these individuals, the anguish David experiences.  The pressure to create something that is not only new and unique but also understood and celebrated by a larger community can easily become overwhelming, as well.  Without protective psychological constructs, creative minds are at risk, so teaching them how to manage the inherent emotional risks that come with creative impulses is as essential as meadows and marsh are to the land’s ecosystems.