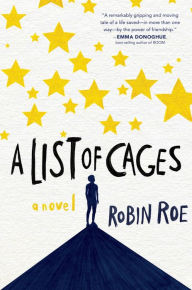 Some books engender an anger and a disgust so intense that readers want to reach inside the pages to yank an abuser right out of a child’s life.  A List of Cages by Robin Roe is one of those books.  Julian Harlow’s Uncle Russell joins Dave Pelzer’s mother from the A Child Called It trilogy and Liam’s father from King of the Screwups by K. L. Going as characters with diseased brains.

Having lost his parents in a tragic accident, Julian is orphaned and spends some time in a foster home before his Uncle Russell takes him in.  However, Russell is unfit for parenting, abusing Julian emotionally, mentally, and physically.

Roe’s debut novel holds potential for opening dialogue about bullying in its multiple forms because it reveals the very real conflict some people experience in their efforts to become an upstander instead of a bystander.  Seventeen-year-old Adam Blake is a happy and high energy senior who has learned to cope with his Attention Deficit Hyperactivity Disorder (ADHD).  His friends see Adam’s optimism as part of his identity, a reason for his popularity.  Because he’s strong and confident in himself, Adam makes everyone else feel comfortable too.  Despite the perception his friends have of him as “unbreakable,” Adam struggles to help Julian, who was once his foster-brother and for whom he feels a protective bond.

Besides being a book that illustrates the effects of abuse, A List of Cages is also one that shares the trauma of loss.  Julian struggles to live minus his blood. The death of his parents plunges him into a grief so deep that he marvels at his very existence:

It’s strange how many ways there are to miss someone.  You miss the things they did and who they were, but you also miss who you were to them.  The way everything you said and did was beautiful or entertaining or important.  How much you mattered (81).

When his parents are gone, Julian no longer feels like he matters: “Because if they aren’t there, you aren’t either” (81).  As time passes and he realizes how even smiles can’t be believed, Julian retreats into his thoughts and into his imagination, where the fictional character Elian Mariner sails off on an adventure or saves people—sometimes an entire planet.  On occasions when he can’t sleep and he’s trying to think good thoughts, Julian imagines a magical place between worlds, “the place in the flash where Elian’s ship disappears before it reappears again” (144).  In this “invisible place,” Julian hopes to see his parents again.  After a series of unfortunate events, when Julian is in the hospital, his therapist Delores Carter sagely points out that “people heal a whole lot faster when they’re with someone who loves them” (237).

So, this is also a book about love in its multiple forms.  Adam not only finds a love that makes him feel giddy, like he has been “injected with caffeine and pixie sticks” (169); he discovers the depth of his desire to save Julian from his abuser.  Even Charlie, a brusk and often unhappy young man, surprises readers when his static character turns dynamic.

With A List of Cages, Roe builds a heart-rending tale of friendship and human resilience.  She invites readers to think about the cages we build, the traps that keep us from living the lives we want.  While some of these cages are imposed on us by others, many of them are self-imposed.  We trap ourselves with doubt.  We may feel we have no choice, when in reality we may not have fully explored our options or we may be afraid to reach out to others, asking for their help.  Sometimes when these offers for help do come, we might even beg for their silence.  Many of us have been taught that struggle builds character or makes us stronger, but Julian’s life provides proof that pain prevents growth, too.  Like “Caliban in the Coal Mines,” Julian wishes for a handful of stars to brighten the dark place in which he lives.