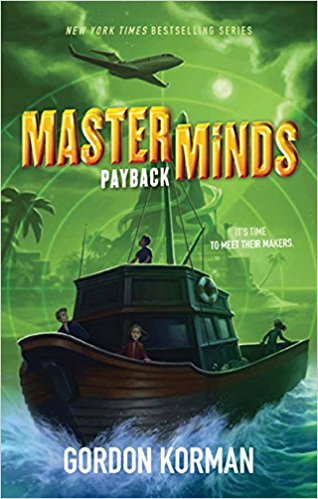 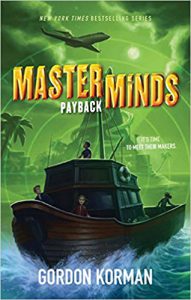 The third and final installment of Gordon Korman’s Masterminds series packs a punch to conclude an epic trilogy. Masterminds: Payback begins right where Masterminds: Criminal Destiny left off. Amber, Malik, Tori, and Eli have been split up escaping from the “Purple People Eaters” chasing them. They’ve been on the run ever since they discovered that their entire lives were fake. They were raised as experiments in a town called Serenity. Living in a fake city where nothing goes wrong, the four pre-teens were actually clones of the most notorious and terrible criminals in the world, living science experiments for something called Project Osiris.

After escaping Serenity and being split up, the two pairs of pre-teens all work towards finding the criminals they were cloned from. The hope is that they’ll find some connection to Project Osiris that they can use to help their fellow clones escape. Meanwhile, they’re running for their lives. If they get caught, who knows what the scientists who raised them will do.

Eventually, Malik and Amber find his criminal DNA donor and Eli and Tori discover an uncanny connection to a celebrity. The relationships they make are risky, though, especially because none of them are sure of what they’re doing. It’s a good thing their criminal genes come in handy for being on the run. They learn to focus only on the present – “surviving the next few hours, the next few minutes, sometimes the next few seconds” (177). They only have to survive until they can find Project Osiris and rescue the clones that are still under the illusion of a perfect life. Then, they can get their payback.

Gordon Korman is best known for his The 39 Clues series, and for readers of those books, Payback doesn’t disappoint. Korman excels at creating a unique voice for each of his four narrators and the characters are complex and sympathetic, making it easy to root for their success. Their story is one of determination, courage, and identity. As the conclusion to an action packed trilogy, Masterminds: Payback builds suspense for an exciting finale to a thoughtful series that will make readers question the role they’re playing in their own lives.