Maverick Falconer is the world’s lamest super-hero, in his estimation.  At age eleven, he’s small, weak, near-sighted, prone to allergies, and possesses an anti-dollar forcefield.  But none of those shortcomings deter Maverick from his goal: Doing good deeds, righting wrongs, standing up against evil, and protecting anybody who is small or weak.

When Maverick was three, his military firefighter dad, died, leaving Maverick alone with an alcoholic and neglectful mother who dates a string of abusive men.  The only stable person in his life is Aunt Cat, who is as wild as her name.  But she loves, defends, and protects M 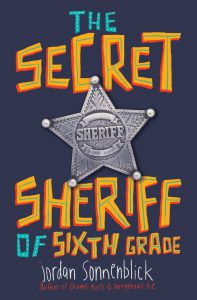 averick.  Wanting to live in his dad’s memory and determined not to spend life ruled by fear, Maverick feels like he should do something every day to make a difference in the world.  For reassurance and inspiration, he carries a gift from his dad in his pocket, a plastic sheriff star.

As the self-proclaimed Secret Sherriff of Sixth Grade, Maverick confronts his first offender, “the Elvis of spoiled, pretty-boy rich jocks” (19) on the first day back to school.   Bowen Gregory Strack is a class act bully who taunts, threatens, and torments.   That he is twice Maverick’s size and has the advantages of strength, reach, athletic skill, speed, and crowd support doesn’t stop Maverick from charging in to rescue Nate Ferguson from the soccer team’s teasing.

After several more visits to the principal’s office, Maverick not only learns that sometimes a good deed feels worse than a bad one but that goodness doesn’t always rub off on others.  He realizes that people lash out when the ugly truth gets too close. From Mr. Overbye, he also learns the importance of being kind, since everyone is fighting some kind of battle.  Life teaches Maverick that making the right choices is really hard for some people, even mothers, fathers, and police officers.   Despite encountering discouragement, Maverick discovers that kindness matters; it just “spreads slowly and even fails for a while” (186).

Another important aspect of Jordan Sonnenblick’s book The Secret Sheriff of Sixth Grade is its lesson about the socioeconomic divide and how it might play out in school or in other social situations.  Sonnenblick writes about schools’ effectiveness as sorting factories: “By the time you get to sixth grade, everybody knows who’s smart, who’s athletic, who’s good at music, . . . who’s rich, who’s poor . . . . There’s no hiding anything for long.  If the teachers don’t expose you, the kids will” (84).  After Maverick befriends Nate, he plays video games and is offered more food than is ever available at his apartment, so he decides Nate’s parents can’t drive him home and Nate can’t ever visit.  After all, Maverick has no technology, has never heard of French food, and has no personal bathroom.   He wonders what it would be like to live with someone who has life under control or to have a parental figure who takes an interest in his life.

With every discovery, Maverick inspires us all to live our lives in the image of a hero, to reach down and help the people coming up behind.  Tim McGraw’s song “Humble and Kind” immediately came to mind as one that describes what heroes do.