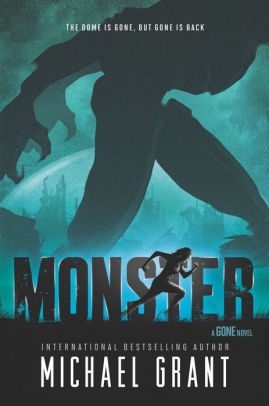 The daughter of two scientists, Shade Darby is thirteen years old when the Dome appears and sits astride the 101 at Perdido Beach, California.   Shade’s mother, Dr. Heather Darby of Northwestern University in 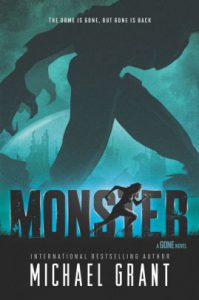 Evanston, Illinois, is called in to explain the Dome, an anomalous, impenetrable, initially opaque, and terrifying enclosure that captured all children younger than fifteen and ejected all persons older.  Because curiosity runs deep in her genetic makeup, each day Shade—against her mother’s orders—watches the terror that is the FAYZ: Fallout Alley Youth Zone, where Gaia, a demented young goddess rules , maiming and murdering.  Unlike the original healing and life-giving character in mythology, the Gaia of Monster by Michael Grant is a fearless, insane, evil, brutish, and seemingly omnipotent monster who is indirectly responsible for Shade’s mother’s death and the deaths of countless others.

Four years later, after observing the brutality and executions in the Dome and barely escaping alive when the Dome ruptures and vanishes, Shade is obsessed with fear and death and guilt.  Like an online gaming addict, Shade can’t shake the need for vindication.  Temporarily, her best friend and one time love interest, the “crazy-good-looking” Malik Tenerife, functions as Shade’s conscience, deterring her from risk and danger.  But when Shade rescues Hugo Cruz Martinez Rojas, a gender fluid creative writer, from a trio of bullies at a bus stop, the two become friends.  A straight girl trapped in the body of a gay boy, Cruz is “multiple choice on a true-false test” (24), according to Shade, whom Cruz decides is “two people living in that pretty, scarred body: a high school science nerd and a shark” (51) with black, lifeless doll’s eyes.  In their pursuit of power and revenge, the two commit a series of crimes, beginning with theft of Anomalous Space Objects (ASO), the origin of the ASO virus which initially infected the FAYZ.

The ASO virus may itself be intelligent, with malignant intentions.  Capable of using any DNA available, the virus, when attached to humans, enables them to morph into heroes, villains, and monsters with powers so great that police forces, intelligence assets, and even armies cannot defeat them.  Handcuffs, prison bars, and bullets have no effect against these heroes, villains, and monsters.  With human civilization on the brink of World War Three, Shade is determined to play a hero in the drama, not only to neutralize the effects of the ASO rocks but to stop the most dangerous of those who acquire super-powers.

On their crime committing, justice-seeking spree, the two encounter Justin DeVeere, also known as Knightmare.  An artistic prodigy, Justin is extremely talented, as well as manipulative, ruthless, and maladjusted.  Because he defines art as “struggle and shock and the bleeding edge of the new and the never-before-seen” (184), destruction classifies as art in his perception.  It is this unique, extreme, and shocking “art” that Knightmare creates, while the Dark Watchers whisper with pleasure.  These Dark Watchers, like tendrils of black smoke, infiltrate the minds of the infected, hijacking their thoughts, unless the hosts can resist the prodding and pushing inside their heads.

Eventually, Shade, Cruz, and Justin appear—along with Vincent Vu, Thomas Peaks, Dekka Talent, Aristotle Adamo (Armo), Malik Tenerife, Drake Merwin, and Francis Specter—on the FBI’s Ten Most Wanted list.  The ten are all affected by the virus in different ways, predominantly proving that when power and violence are made flesh, power not only corrupts but distorts human consciousness.  Armo, for example, transforms into a white-furred, two-legged, canine teeth-baring, roaring, mindless engine of destruction” (173), insanely and maniacally lashing out with fury—much like the nightmarish rough beast and the anarchy alluded to when “the blood-dimmed tide is loosed and things fall apart (146) in “The Second Coming,” a poem by William Butler Yeats.

With this dystopian horror tale reminiscent of Stephen King’s craft, Grant has combined absolute terror with an element of the comic, where nothing is dull and predictable.  Although the young adults infected by the ASO virus are impossible blends of incompatible life-forms resulting from extreme mutations, Grant calls into question the very real fears of genetic engineering and human experimentation with alien life forms in this Gone series sequel.  The book, first in the Monster series, also explores what it means to be a monster while inviting readers to consider the faults in binary thinking.  Because so much of life is lived in the gray areas, a binary world of good or evil, mysterious or meaningful, male or female is unrealistic and imaginary.  With all of these features, the book promises to frighten its readers out of complacence and into the world of wondering: What if the human species encountered these changes?  Like all good science fiction writers, Grant explores possibilities and pushes boundaries.