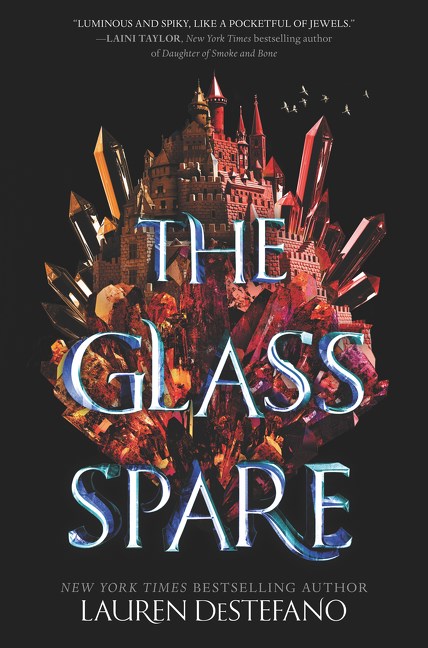 By: Donna
In: Sci-Fi & Fantasy (YA), Young Adult Book Reviews

Despite the world’s efforts to destroy them, Wilhelminia and Gerhard keep each other alive.  Born into the Royal House of Heidle, Wil and Gerdie are spares, the youngest and scrawniest children of the king of Northern Arrod, the world’s wealthiest nation. 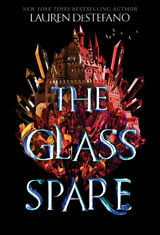 Wil, like her queen mother, is a restless wanderer, a child in love with the free air.  Although Wil is also a champion for justice, a darkness lurks in her blood, a curse that has scarred her, leaving a birthmark.  Gerdie, forever the pragmatist, believes that spells and curses are nonsense.  A scientist who clings to logic, Gerdie thinks magic is a fairy tale.  Ravaged by the Gray Fever when he was a boy and not expected to live, Gerdie is nearly blind in his left eye and wears metal braces to help him walk.  Although he has a soft heart for his older sister who always nursed him back to health, he works with a genius frenzy in his lab, determined to solve any mystery and to uncover its scientific process.

Owen, the oldest of the Heidle children and heir to the throne, has an insatiable desire to learn everything he can about the world and its people.  Consequently, he travels often and is a voracious reader.  Present at his baby sister’s birth, he lovingly calls her Monster because of her bloody and white appearance marbled by purple veins and resembling “the undead monsters of the West” (186) in Owen’s eyes.  Because Owen wished to distract her from worry and to drag her from her vigil at Gerdie’s bedside when he later grew sick, Owen taught Wil to shoot an arrow, to excel with short and long-range weapons, to engage in hand-to-hand combat, to bridge a size disadvantage, and to evade an attacker.   These combat training sessions serve the princess well when she visits the Port Capital, where she ventures, disguised as a courtier, to smuggle raw powders and chemicals for Gerdie’s cauldron.   Although Gerdie doesn’t have the heart to destroy anything, he loves making weapons, perfecting them or creating something that has never before existed, and Wil enjoys the adventures.  In fact, Wil is determined to grow past her feminine upbringing, to live a life beyond the poise and braids and billowing skirts of a privileged princess.  To avoid having her brain puddle in her skull over gentle sensibilities and pretty things, Wil flirts with danger and intrigue.

On one occasion, while Wil and Gerdie are exploring a Wanderers’ Camp east of the river, Wil is attacked by a black market vendor from whom she previously stole some tallim.  In her terror, Wil attacks and kills the man, turning him to stone: ruby, to be precise.

As Wil experiments with what she considers a curse and as Gerdie attempts to cure her, Wil discovers that whenever her heart beats fast and her adrenaline spikes, life turns to stone in her fifteen-year-old hands.  Determined to help his sister and to protect her secret from their father, who will likely exploit it out of greed and a hunger for power, Gerdie fashions a pair of gloves from an alchemized formula that behaves like flexible armor.   Owen, afraid of how King Heidle might use his sister as a tool for war, promises to find out what he can from a marveler named Pahn.  But Wil can’t wait, and sets off to find Pahn on her own, with Owen in pursuit.

Wil’s search has grave consequences, which result in banishment and danger for Wil, who discovers that smiles are the easiest lie.  Saying little and smiling in lieu of conversation, Wil keeps her multiple secrets as she searches.  Her journey takes her to the Southern Isles, King Zinil’s kingdom whose borders are closed in preparation for war: no imports, no exports, and no word escape the reclusive king’s dominion.

Here, she meets the banished prince, Loom Raisius, who seems immune to Wil’s deadly power.  Disowned for wanting to help his own people, Loom believes that a kingdom shouldn’t be blamed for the mistakes of its king and wishes to kill both royal families out of love for the countrymen that his father is destroying with his stubbornness and greed and to stop the war being initiated by the North.  Ironically, Wil finds herself attracted to the dark and mysterious Loom, despite his murderous intentions and his selfish ideas for how to use Wil’s power.

While attempting to survive this dark paragraph in her once-upon-a-time fairy tale life, Wil encounters first Zay and then Espel—two conniving women who also have a relationship with Loom.  All three of these strong females are willing to fight for their convictions and to save those they love.

With The Glass Spare, author Lauren Destefano weaves a tale of intrigue, betrayal, and surprises—one with a cliff-hanger ending that hints at a sequel.  Although it is a fantasy, the book shares some very real truths, namely that what we hear doesn’t have to be what we believe, that fear can take on many forms, and that silence is not the absence of presence but its own presence.  The novel also shares the historical fact about royalty and their fear of family portraits.  For centuries, world leaders had agreed that “revealing portraits and photographs of royal children was a safety risk, opening royal families up to kidnapping for negotiations and revenge” (290).