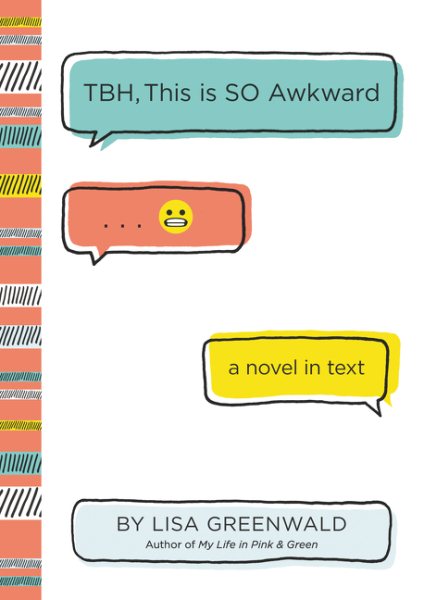 TBH, This Is SO Awkward 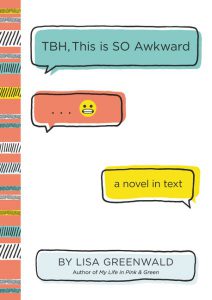 Just as teen readers of Lauren Myracle’s books, such as ttyl, were inspired to reflect on the bad decisions they might otherwise have made without thinking of the consequences, now tween readers will get the same opportunity by reading Lisa Greenwald’s January release, TBH, This Is SO Awkward. While this novel’s content is not as provocative as that in the Myracle series, Greenwald uses a multi-genre approach, writing her novel with memos, diary entries, texts, emails, postcards, and notes passed in class to recreate sixth grade drama.

In addition to navigating math midterms, reading logs, and social groups, Victoria Melford has to endure the torture of being the new girl at Yorkville Middle School because of a midyear move from Philadelphia.   Her efforts to build a social network fall flat, however, since groups, like the M Girls, are already formed, and others, like Cecily Anderson, Gabrielle Katz, and Prianka Basak, have been BFFAE.  From that trio, readers learn that even tight relationships can unravel.  When Prianka accidentally sends a group text to Victoria and when Gabby lies about liking Colin Hayes, their social cruelty threatens their friendship bond.  Add the confusion of crushes and Cecily’s efforts to keep the peace getting stretched thin, and conditions are ripe for conflict.  Eventually, the principal issues a warning and parents step in with apps that enable them to spy on their children’s text messaging practices so that the middle schoolers have to decide whether they value their phones over social decency.

From Greenwald’s character types, readers learn about the effects of cyberbullying and about life’s true riches, which reside in relationships, not in things.  Greenwald also gives a nod to diversity awareness with her mention of Bal Vihar, a Hindu culture and philosophy class attended by some of the students.