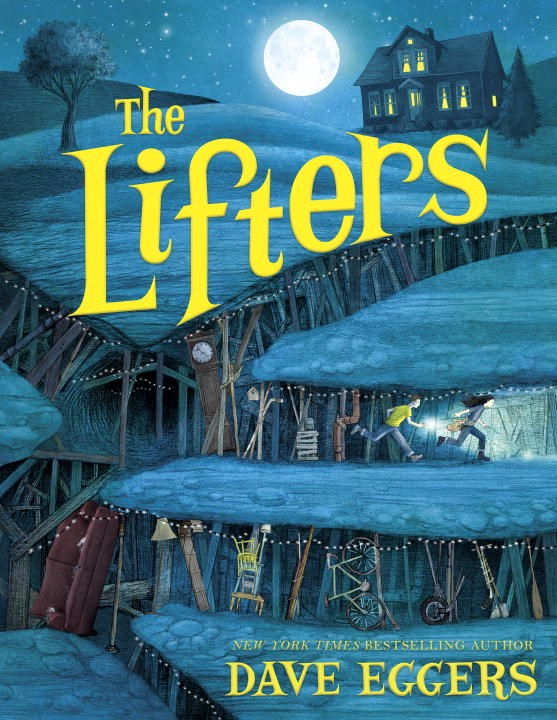 Mix adventure, jokes, and a little mystery, and you have a recipe to keep most readers engaged.  Dave Eggers applies this formula to the writing of his recent middle-grade novel, The Lifters, which is actually an extended metaphor for combatting despair.

The protagonist of The Lifters, twelve-year-old Granite Flowerpetal wishes for a name that is both easily understood and easily spelled, so he shortens his name to Gran, not realizing at the time how readily that version might be confused with the term some individuals use to refer to their grandmothers.

Gran, who shares a bedroom with his five-year-old sister Maisie, hears his parents talk quietly at night about money, and he feels the “sadness that courses through a house when money is uncertain” (28). Because of the shortage of regular work, Gran’s father decides to move his family from the coastal Atlantic to Carousel, a rural, hilly hamlet where sadness seems to have taken serious hold.

At Carousel Middle School, Gran appears invisible.  No one snickers at his name, no one speaks to him, and no one notices him.  Eventually, he encounters Catalina Catalan, who not only moves with confidence and purpose but with a certain secrecy.  He also befriends Duke, a former jockey and the school’s janitor.  From Duke, Gran learns the origin of Carousel’s name, its history, and the role that Duke played in carving carousel animals that made the now dying town once world-renown.  Through Duke’s description of the Romance Side of an animal in the Outside Row, Eggers includes interesting details about a carousel’s artistry and terminology.

Gran, Catalan, and Duke are joined in their efforts to fight despair, to battle the Hollows—“underground hurricanes hell bent on hurt” (200)—which create sinkholes in the earth.  Because despair is drawn by hopelessness, Gran and Catalan realize they need to strengthen the foundation upon which they live and to spread their beliefs for the benefit of others.  By strengthening what’s underneath, they might allow for happiness to invade.  Eggers also develops the idea that promises keep us upright—pun intended; they hold up everyone and everything: “A promise is like the earth underneath us.  It must be solid.  How can we walk and run and live and laugh when we can’t count on the ground beneath us?” (204).  Because of their core convictions and their subsequent actions, Catalan and Gran become Lifters.  To be a Lifter, a person has to be serious, to be brave, and to know sadness.  A Lifter should also be nimble, strong, clever, and small.  I especially appreciated Eggers’ double meaning about the value of humility when he writes: “Most of us grow too big to stay in the work” (264).

Presented in the form of morals, Eggers includes other teachable moments in his novel:

As they work to combat despair, Gran and Catalan not only discover that bravery has its limits but that one “brief act of caring—just one person seeing another’s struggle and bringing them to their feet again” (262) can make all the difference.