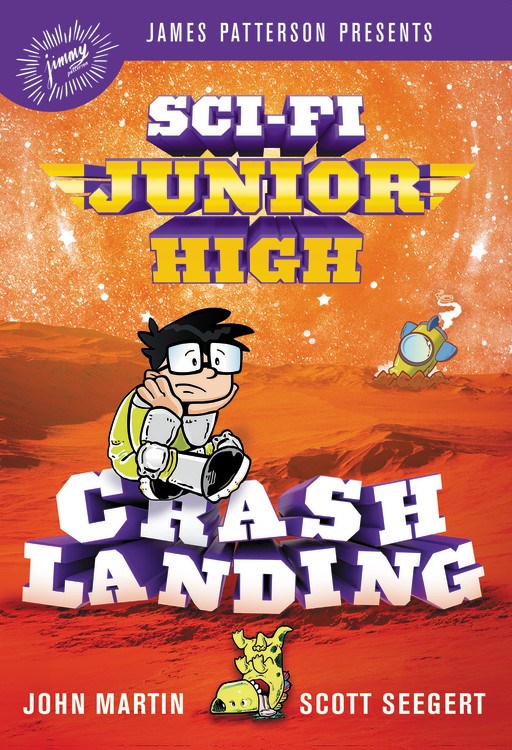 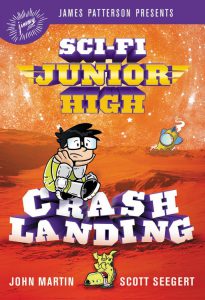 Sci-Fi Junior High: Crash Landing by John Martin and Scott Seegert is the second book in a series presented by James Patterson’s new children’s imprint.  This illustrated space adventure, told by blending the graphic novel genre with a narrative format, features eight days in the life of Kelvin Klosmo, an average human with a tendency to find trouble.  Kelvin and his family have come from Earth, where his parents were the top two scientists, to conduct research 329 quadrillion miles away.   Because Kelvin doesn’t share Klyde and Klara Klosmo’s brain power and because he is tired of being known at the space station as the guy who is not a genius, he decides to do one big thing that will change his reputation from intellectual failure to super amazing.

On his reputation changing journey, Kelvin engages in several flopped attempts.  Although he makes progress in the “new name for himself” department, the humiliations aren’t the reputation he hopes for at Sci-Fi Junior High.

When Kelvin’s dad, who is the head of robotics, asks for his son’s help in the laboratory, Kelvin discovers that his dad is engaged in dangerous science by keeping something that can be used for conquering the universe if it gets into the wrong hands.  Because of the potential danger, Kelvin thinks the Zorb should be destroyed, while his dad, who wants “to examine it and study it and learn how to harness its power for the good of everyone in the galaxy” (48), thinks the Zorb is completely safe.

In a parallel story, Erik Failenheimer, an evil genius, is hoping to swoop in and steal the Zorb.  But with Kelvin’s Zorb Destruction Plan in this Jetsons-style comic, the reader might guess that trouble will ensue.