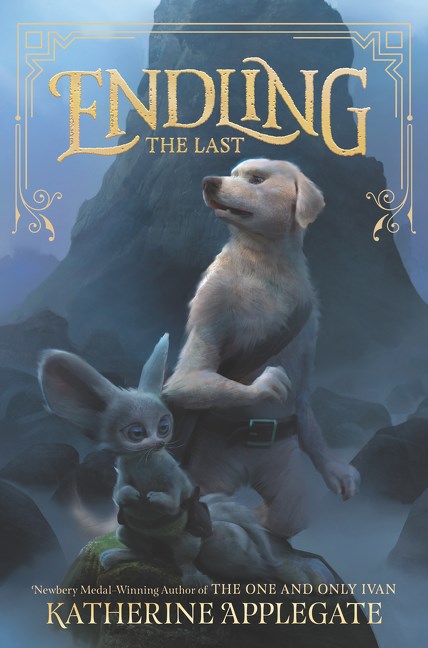 By: Donna
In: General Book Reviews 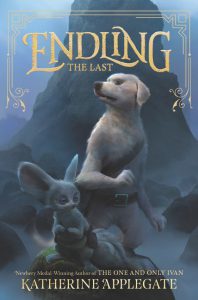 Told in five parts accompanied by maps and full-page art by Tony Piedra, Endling: The Last by Newbery medal-winning author Katherine Applegate opens with a quote from Rachel Carson’s Silent Spring, reminding readers that we are all part of the great web of life.  The first in a series that promises adventure, action, and mystery, Endling features well-developed and creatively imagined characters to whom the reader quickly becomes attached and invested.

Khara is fourteen years old, frugal with words, and a talented fighter who has discovered the power in disguising herself as a boy.  On her personal quest, she encounters Byx, a dairne who considers herself a know-nothing pup of questionable judgment, but who is an inquisitive wanderer with short legs, weak lungs, and a kind heart.  In exchange for saving the life of Tobble, a wobbyk,  Byx acquires a companion who, according to Wobbyk Code, must save Byx’s life three times in way of returning the favor.

Not unlike questers on an incredible journey, these unlikely travelers take risks together and endure multiple hardships.  Along the way, they add and subtract numbers from their troupe, hoping to escape the despotic reign of Murdano, a power-hungry human who desires to rid the world of truth and who does not understand the balance of life.  In his “will to dominate and control, to use and abuse, [he] is destructive to all” (248).  Of the six great governing species, humans are the most unpredictable of predators, and according to Rorid Headcrusher, a raptidon with status among the rulers of the air, “No other species can trust humans unless there are dairnes to speak truth.  Humans are liars. . . . Their word is meaningless.  Their promises last only until the echoes of their lies have died out” (246).  Because dairnes are able to detect lies, no creature can lie in the presence of a dairne.

Believing that in truth lies strength, Byx intends to continue her quest to find more dairnes so that they can fight lies with truth.  Despite the risk and danger, Byx relishes the idea of possibility and has no desire to be used as a weapon for war.

Besides revealing humans through outside eyes as having “complex motives, endless greed and ambition, and uncertain loyalties” (301), Applegate’s book shares other morals about communal treatment, such as: a creature’s being small or looking silly from an outsider’s perspective is “no reason to treat them as disposable” (324).

As this installment concludes, pain, danger, and death await Byx and her companions: “Renzo, the thief with honor, and his dog, Dog.  Gambler, the principled felivet.  Tobble, the worthy wobbyk.  Vallino, the tireless steed.  Khara, the heir of the Donatis, wileder of the Light of Nedarra.   Although great forces are against them, Byx has the “one thing that even heroes need in order to go forward: hope” (381).  She hopes to find more dairnes and to bring them out of exile so that the not-quite-extinct, might restore balance in the world.