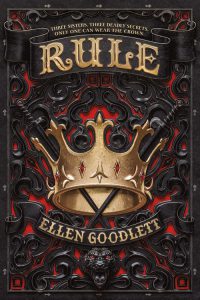 Ellen Goodlett’s debut novel Rule is a fantasy-adventure story that recounts the tale of three sisters, each hiding a dangerous and treasonous secret.  When King Andros of Kolonya announces that these girls from vastly different backgrounds are his daughters, each struggles to adapt to new circumstances and expectations but eventually all three come to see being a bastard daughter of King Andros as an opportunity to make a difference and to change conditions for their people.

Zofi, a Traveler from the North with a battle-ready stance, is built for a life on the move, not for one cooped up with haughty nobles. She has mastered the Blood Arts, gifts from the gods to the people of the Reaches; gifts that make her faster, stronger, and better able to protect what she values above all: family.

Akeylah, an Easterner with a sharp intelligence, is the victim of an abusive step-father and rather relieved to escape her previous home where rebellion is brewing.  However, she must now find a way to undo the Vulgar Arts curse she put on the man she thought was her father.

Although Florencia has lived in Kolonya City among the royals as a maid and knows their idiosyncrasies and customs, she flounders in her new station as a princess.  With steely resolve, she vows to win the throne so that she can become a champion for people who are treated like outcasts, abused for sport, or denied basic human dignity.

Just as Katniss from The Hunger Games by Suzanne Collins passes judgment on the abuse of power, the excessive use of resources, and the social habits of the Capitol, Goodlett’s book features courageous female role models who struggle to watch suffering in others and refuse to stand idle when Kolonya is exploiting its subjects and hoarding all the resources from the Reaches.  Although within the protected and pampered walls of Kolonya it might be easy to forget about the world outside and to think that the opinions and needs of lords and ladies matter most, the girls know that civilization would fall apart without farmhands and laborers.

In this vipers’ nest where royals rule, the trio doesn’t know whom they can trust.  After being tricked by Ambassador Danton, Florencia vows to never succumb again to the weakness of trust.  Despite their competition, the girls become allies in their fight for the crown.

Goodlett’s book asks important questions and invites readers to confront complicated social issues about honor, war, ally behavior, abuses of power, socio-economic disparity, and hate.  However, Rule ends abruptly and without a resolution; perhaps a sequel is on the horizon.