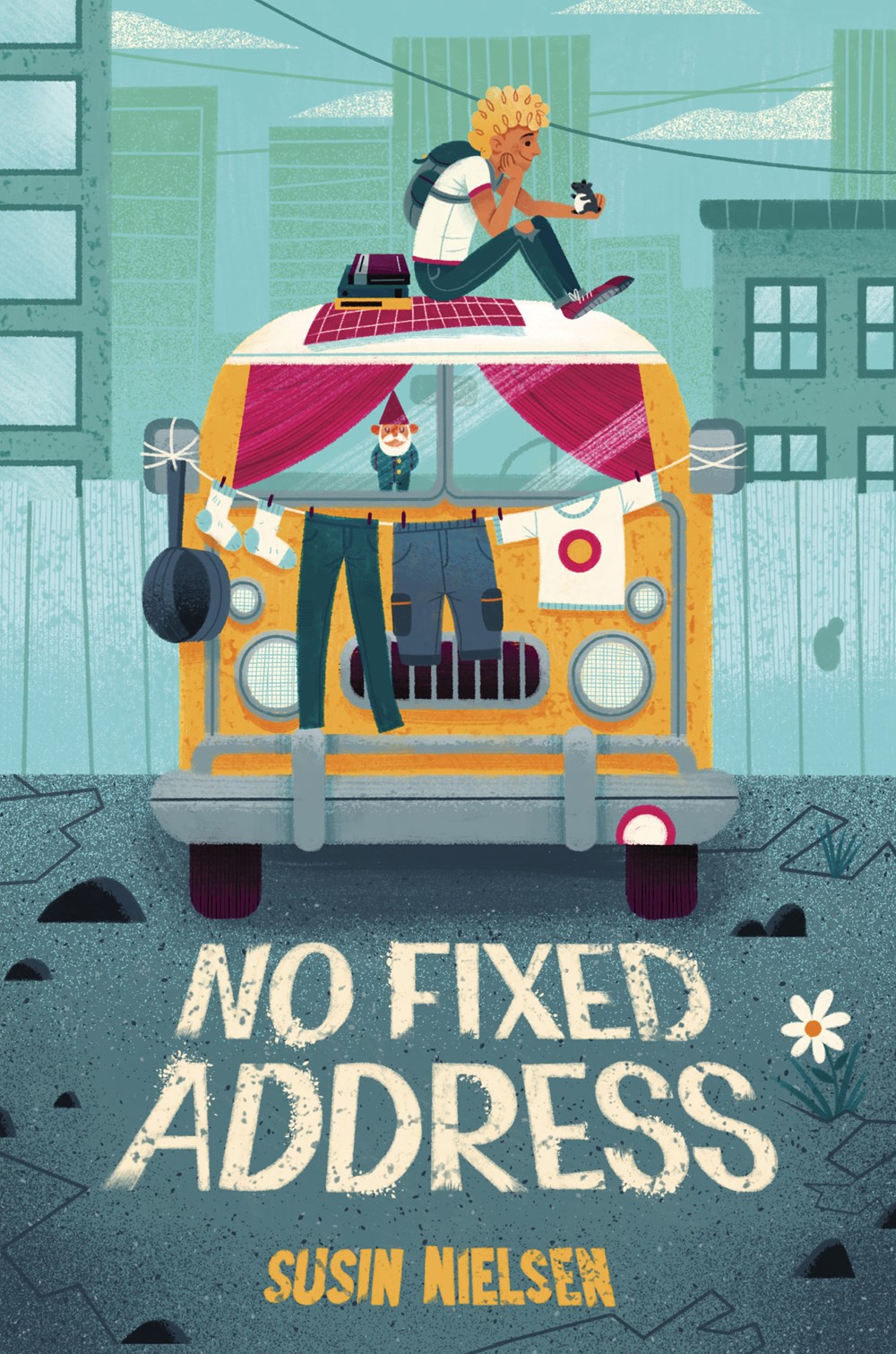 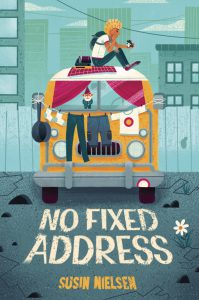 Combining humor, heartbreak, and hope, Canadian writer Susin Nielsen writes No Fixed Address.  In this story about people who suffer from a childhood trauma and subsequent depression, Nielsen also exposes some of the long-term consequences.

Felix Knutsson, who is twelve and three quarters years old, calls his mom Astrid because she considers the title Mom to be too hierarchical.  The reader will discover several other peculiarities about Astrid, who spent some time as a child in the foster care system after she and her brother were abused by their father.  But, if nothing else, Astrid is a survivor and a prevaricator.

Unlike his mother, Felix is not a natural-born stretcher of the truth, but he does have keen powers of observation and a strange knack for storing facts.  He also owns a gerbil, whom he named Horatio Blass, after the host of Felix’s favorite fact and trivia game show, Who, What, Where, When.

When Astrid, who is an artist, loses her teaching job and falls behind on the rent, she and her son begin to live in a gunmetal gray, 1987 Vanagon Syncro van with a pop-up roof for extra sleeping space and a built-in awning.  While the Volkswagen Westfalia is a masterpiece of a camping vehicle for the summer time, it doesn’t provide the amenities of a permanent home.

As the time spent camping extends into September when school starts and then into October and November when temperatures drop, Felix begins to wonder when he’ll have a fixed address and when he’ll have the convenience of a toilet!  Felix also worries about his mother, who begins to steal and continues to lose jobs and to fall into Slumps, bouts of depression that render her virtually inert.

Convinced that he will lose his mom, Felix hides the truth from even his teachers and his friends, Dylan Brinkerhoff and Winnie Wu.  When the opportunity to become a contestant on Who, What, Where, When—Junior Edition arises, Felix is convinced that if he wins, the prize money will rescue him and his mother from homelessness and poverty.

Several elements of this heart-wrenching book intrigued me.  The definitions that Felix offers on pages 31-34 about the various types of lies told by his mother reminded me of Judith Viorst’s famous essay “The Truth About Lying.”

This book also shares interesting information about Felix’s ethnicity. Felix is “fifty percent Swedish, twenty-five percent Haitian, and twenty-fiver percent French.  “Add it up and it equals one hundred percent Canadian” (13), according to Felix.  Throughout the book, Nielsen includes Swedish words like mormor (mother’s mother), foods like pepparkakor dough (a type of ginger cookie), and traditions like keeping a tomtar—a mischievous gnomelike creature in Swedish folklore.  “[Tomte] watch over you and protect your family.  But if you don’t treat them with respect, they can also be cruel.  They might play a trick or you or steal your things, or even kill your farm animals” (8).  So that he will have his own protector, Felix receives his tomtar from his mormor on his fifth birthday, and Felix names him Mel.  Mel becomes a character of sorts in Nielsen’s book, as does Dylan’s poltergeist, Bernard, a friendly but mischievous ghost.  These creatures give the two boys comfort, a feeling that something mysterious and otherworldly is looking out for them.

With its various elements, No Fixed Address reveals the truth about homelessness and how easily some people can slip into poverty.  It is also a book about the power of friendship and community and how having faith in other people may be as important as having faith in God—or ghosts or tomte.