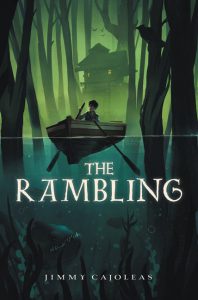 Eleven-year-old Buddy Pennington is hexed with bad-luck blood so that everything he touches seems to end in disaster, it does.  (I found the author’s use of these parentheticals, along with his Huckleberry Finn-like river setting, a clever way of establishing local color).

When Buddy accidentally sets his mother’s bakery on fire, he decides that he is tired of being a burden to his mother and would be better off with his father, so he leaves Collardsville, a boring but respectable town, and sets out for the swamplands in search of freedom and his pop, a true wild man.

After five years absent from his father and with only childhood memories to go on, Buddy has airbrushed away his father’s finer flaws and painted him as “a master of a million arts—a poet, a carpenter, a pugilist of the highest order, and the handsomest man in twelve counties” (2).  Davey Boy Pennington is also a famous Parsnit player renowned for his lucky blood.

“The best and most noble game in all the world” (17)—according to Buddy—Parsnit is a mysterious card game of wit that involves spinning a tale out of skill and chance and magic.  Somewhat similar to tarot cards, a Parsnit deck is played between two duelers whose oration is dictated by the cards and whose play is refereed by a witch.

When Buddy sets out to find his pops, his bad luck comes along for the ride, it does, and on the eve of his reunion with his pop in the swamplands, his pops is kidnapped and ferried away like a criminal.  Despite his father’s desire to keep Buddy out of the mess he’s in, Buddy is determined to rescue his dad.

On his rescue mission, which takes him down the river, Buddy meets Tally.  Tally turns out to be a pickpocket and a member of the spider-folk who is hexed just like Buddy.  Although she saves Buddy’s life more than once, she also steals his daddy’s deck of Parsnit cards, his livelihood and prized possession, and uses it to lure Buddy astray.

The mission to save Buddy’s pop takes Tally and Buddy on a life-threatening adventure, where they encounter the Creepy, a swamp creature who makes art of dead bodies, as well as witches and others who are addled by age or arrogance or some other malady.  But the most addled is likely Boss Authority, a maniac with a magic problem.

To set right all that has gone awry and to rescue all who have become his friends, Buddy must play a Parsnit duel with Boss Authority, he must. And true to Pop’s word, “Life isn’t so much what happens as who tells the better story about it later” (30).  Truth be told, The Rambling by Jimmy Cajoleas is a heck of a story, and it is up to Buddy to make sure it has a happy ending!

Cajoleas’ middle grade fantasy isn’t the sort to end all fairy tale happily-ever-after, however, as The Rambling is a story about life.  And life, if nothing else, is “one big stretch of hurts until your luck turns” (10).  Buddy also learns that “real life is too big and weird and confusing for something so simple as making sense” (117).  That life is “just wondering and wandering and hoping, maybe getting a thing or two right now and then” (191).  He also discovers that love is a complicated emotion and that loving a flawed parent is even trickier, it is.  Although love doesn’t forget, it “changes, it grows tougher, and it tries to forgive” (287).