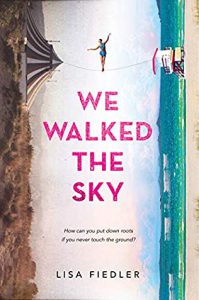 Those who have ever struggled with questions about family and tradition and what it means to respect the past while embracing the future will likely find themselves in the pages of We Walked the Sky by Lisa Fiedler.  This poignant and well-crafted novel engenders a range of emotions—from anger to exasperation and from sorrow to exhilaration!  It not only leads readers to their own popcorn-scented memories and emotional free-falls but reminds us of personal failures and triumphs, revealing that joy really can trump tragedy if we remember to absorb the losses and store them in our hearts, because when the sun comes up, the show must go on.

Under the influence of Fiedler’s creative genius, readers will ride a roller coaster of emotion with Calliope (aka Callie) VanDrexel who knows that being a tightrope walker is both physical and spiritual and to be uprooted from that is a loss of everything that grounds her and gives her support and security.  For Callie, home is motion and change and adventure because home was the circus and walking the tight rope until her grandmother Victoria dies.

Now, Callie has to get used to a new place, a place that stands still.   And standing still for too long means failure for those who walk a wire.  Directional inertia is the means by which she has remained alive.  Her life experiences have taught her that the only way to stay balanced is to keep moving forward.  However, with Victoria’s death, Callie’s mother Quinn—who is a show animal specialist—decides that she and Callie will leave the circus.  Quinn has taken a job in Lake St. Julian, Florida, where she will work for millionaire Brad Marston at a sanctuary for retired show and zoo animals. Being untethered from what she knows and loves transforms Callie into an angry, snarky, antagonistic girl.  Furthermore, losing Gram has put Callie on a crash course for misery.  How could Florida be home when home is “a moving train, a taut wire, and a cavernous Big Top ringing with applause” (157)?

Part of Fiedler’s genius resides in how she connects the past to the present.  Callie’s story actually begins in 1965 with Catherine Hastings whose mother is dying and whose father is an abusive tyrant.  When Meredith Quinn Hastings tells her sixteen-year-old daughter, “Go, Catherine, go!” she runs.

Seeking confidence, purpose, and freedom, Catherine escapes her father’s physical and emotional beatings and joins the circus.  Just as the circus is filled with performers who do what is difficult and make it look simple, Catherine reinvents herself to become Victoria Davis.  Although she claims to want agency and self-reliance, Victoria discovers confidence, grace, magic, love, and family bonds.  However, on her journey to becoming an athlete, daredevil, and dancer in the sky, Victoria has many close calls, false starts, and shitty experiences.  Her understanding begins with observation and with a mentor and friend who is willing to show her the ropes.  As Victoria learns from those who know, she grows—recording her lessons, memories, and words of wisdom on scraps of paper: match books, napkins, popcorn boxes, business cards, and cigarette papers.  She stores these gems mined from her life in a pale blue vinyl jewelry box purchased from Woolworth’s.

Fifty years later, Callie withdraws these sentiments from her grandmother’s memory box and reads them like fortunes, insights, and warnings.  These Victoria-isms serve as Callie’s safety net while she navigates the ropes of social dynamics and the delicate public school ecosystem to avoid finding herself in a bully’s noose or a piranha’s belly—the piranha named Kristi Baylor.

With Jenna Demming as her mentor, Callie discovers what it means to rewrite her life story with a freshly-sharpened pencil.  From Jenna, as well as with her own mother’s patience and guidance, Callie gradually learns to walk on the ground.  Despite the distress she experiences, she keeps moving forward.  Along the way, she finds some people who don’t mind stumbling around with her to make sure she stays on her feet. She also understands how friendship is a reciprocal relationship, one in which she may be called upon to be the net instead of the tightrope walker, one where she has to drop her fierce independence and her hesitation to trust someone else.  After all, there are risks in every relationship: the risk of loss and loneliness and potential missteps.

Many of the lessons learned on the tight rope are really life lessons, advice for coping with adversity, setbacks, and grief.  We have to keep moving forward and trust that the show must go on, whatever that show turns out to be and even when it’s not the show we expected to be in.  Along with Callie, the reader also realizes that nothing is a solo act and that life has more than three rings.  We not only share common experiences, we also share a circus called life.  Perhaps the novel’s truest words—especially applicable to contemporary times—are spoken by Callie’s mom, Quinn: “You can’t let one thing—one talent, one person, one particular way of life—stop you from loving other things, too.  The world has more than three rings, Callie” (235).

Ultimately, Callie learns that life is always a study in balance and that when she is in emotional free-fall, she needs someone with whom to share her hopes and dreams and fears and shortcomings.

As Fiedler shifts from the past to the present to tell both the story of Victoria and the story of Callie, we realize that “the show gets passed down from those who lived it to those who are living it, to the ones yet to live it, with all its surprises and changes, the catches made high above the crowd and the falls into the safety of a waiting net” (284).  Another key message in the pages of this poignant story is that “home is not a place; it is the people who take care of you when you need it, and even when you don’t” (289).