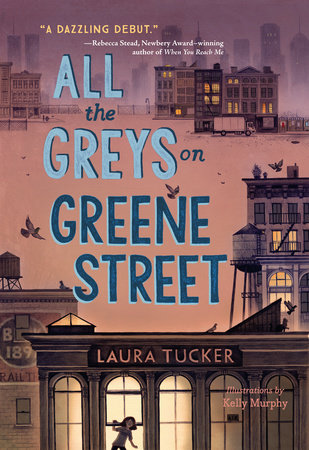 All the Greys on Greene Street 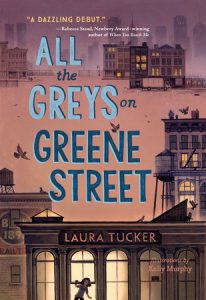 All the Greys on Greene Street by Laura Tucker tells the colorful story of Olympia, a twelve-year-old artist who is named after a painting by French painter Manet.  Olympia’s (aka Ollie) dad Graham is an art restorer and her mom Doll is a sculptor.  The family lives in the Soho neighborhood in Manhattan, New York.

Ollie’s best friends are Alex, an agile young man who Spiderman’s his way up a wall and who practices jumps like a stuntman in training; and Richard, a monster aficionado fascinated by science who is developing a scrapbook that he calls the Taxonomy.  Using her sketching talent, Ollie will occasionally draw pictures for Richard’s monster Taxonomy.  Her favorite art tool is the Blackwing 602 pencil with which she can achieve varying shades of gray and smudged shadows to complete her drawings.

While Tucker’s novel tells the story of all three young people, this is really Ollie’s story and the May Day—stress call for help—that she encounters when her life spins out of control.  Only Ollie doesn’t ask for help; eventually it is thrust upon her.

Olympia thinks of herself as a curious, independent cat person, but when her dad departs mysteriously for France in the middle of the night, she has her share of please-love-me, don’t-leave-me, desperate doggy days.  And when her mother falls into a serious bout of depression and refuses to get out of bed, Ollie decides to turn the entire situation into a mystery that she hopes to solve: Why did her dad leave? What does his cryptic note mean? When is he coming home?

As she sleuths, Olympia realizes that real life mysteries aren’t the same as the formulaic story books with their tidy endings.  In real life, the leads and clues don’t necessarily add up to a solve, and often one discovery gives way to another mystery, such as Who is Apollo’s Ture Lost Love and How can Ollie make her mom better?

Apollo, Graham’s business partner, tells Ollie and her friends that the real point of a mystery is not about the solution but about the search.  The search sets the plot in motion so that the hero can find out who he or she is and discover a way to be in the world without causing harm to one’s self or others.

Although Tucker’s book is about friendship, family, and self-discovery, it is also about depression, art, and human resilience.  Ollie learns that her mother’s depression isn’t her fault or something that she can change or fix.  Along for the lesson ride, readers further realize the depth of observation an artist possesses.  An artist not only sees the world differently but actually sees what others often don’t.  This power of observation likely derives from a deeply curious nature; artists possess a desire to know, to discover, and to create.  They see the ordinary—like a “ferocious pink glow peeking out from behind the horizon” (221) at the end of the day—and turn simplicity into something extraordinary.  Sometimes they make art for others, but more often they make art for themselves.  While art has the ability to wake something up in those who need the nudge; some artists are already feeling too much, which may explain the stories we hear about melancholic artists.  In their compelling need to create, they often neglect more practical concerns like health, bill-paying, and allocation of resources; sometimes artists are even plagued with doubt about their work’s worth, and by association, their own worth.

Finally, the book asks an important question about museum art: “Why was it better for a museum to steal those things than the grave robbers who’d come to take [an Egyptian’s] gold?  Because of the fancy glass case and the information card?  It wasn’t better—not to the people who’d lost the art, anyway” (261).  With all of these topics for critical thinking and learning, Tucker’s debut novel for middle grade readers is sure to be a hit, one with memorable power!