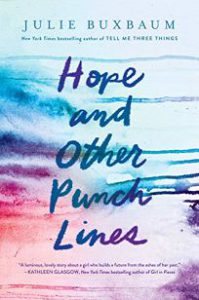 What does happily ever after really mean?  Perhaps fairy tales promise happy endings to distract people from how awful life can be.  Or perhaps they gift us with hope.  These are topics that Julie Buxbaum explores in her newest novel, “Hope and Other Punch Lines.”  She also considers the roles that humor and love play in our lives as we struggle with those moments that cleave our lives, and perhaps us, into befores and afters.

Abbi Hope Goldstein calls herself a fern, nothing exotic or flashy, just a standard issue brunette with basic tastes and a natural inclination to blend in.  Her more audacious and risk-taking friend since childhood, Cat, is decidedly more social and susceptible to pop culture—unnatural hair color, tattoos, body piercings, and parties.  Consequently, their friendship has unraveled and they have grown apart, and Abbi hasn’t found a group to fill the void.

Although she was supposed to die on her first birthday, Abbi survived the September 11, 2001 terrorist attacks that killed countless people and changed the lives of multiple more.  Because a photographer captured a picture of Connie Kramer saving Baby Hope from the chaos and rubble, Abbi has struggled to flourish since she has been treated more like a symbol of hope and optimism than a real person.  People look at the photograph and see patriotism, resiliency, sometimes, perversely, even a happily-ever-after” (49).  None of which has anything to do with her, according to Abbi.

Sixteen years later, she may still be a victim of that terror, as she is suffering with 9-11 syndrome, a respiratory infection or a form of cancer from the exposure to toxins after the explosion.  Thinking that her days are limited, Abbi starts to think in terms of before and after.  But this focus ensures that she will see the world through a distorted lens.  Hoping to gift herself with a summer of joy, she takes a position as a camp counselor at Knight’s Day Camp.

Here, she meets another counselor, Noah Stern, the only straight boy, according to his friend Jack, who doesn’t care if he sometimes sounds super gay.  Believing that humor deflects pain and that a well-timed joke can solve anything, Noah is always looking for a laugh line.  “[He] abuses comedy the way other people abuse drugs” (14).  Because we all have wounds, Noah is also looking for a little hope—pun may be intended.  His philosophy is that “you can be serious and funny at the same time.  We need the serious to recognize the funny, and the funny to give us even a shot in hell of surviving the serious” (100).  For him, serious and funny are mutually dependent, not mutually exclusive.  While some people have a theory that we need to laugh through the worst things in life, others have a theory that experiencing the hard stuff is how we grow to be a better version of ourselves and keep our lives from being a waste.

Neither young adult initially knows the secrets of the other: that Abbi may be dying and that Noah is looking for someone in the picture, someone he believes to be his father.  Under the guise of writing a story for the school newspaper and needing Abbi to provide legitimacy to the interviews of other survivors in the photo, Noah sets out on his journey of discovery.  Both young people uncover truths and learn important life lessons.  Abbi learns that the picture that has defined her as Baby Hope can be empowering.  One of the survivors takes the worst thing that ever happened to her and transformed it into something powerful and productive.  Despite knowing that the entire world can unravel in the span of a single minute, Abbi begins to knit back together the rent in her fabric of being.  She learns that love is an addictive swirl of sensation, of “chills and butterflies and warmth” (206).  Kissing Noah seems like a spectacular way to spend her “one wild and precious life” (181).   Her grandmother tells her, “You don’t mess around with love.  When you got it, you hold on to it.  Simple (297).

Life, however, is far from simple.  Will Abbi survive 9-11 Syndrome?  Will Noah—who thinks of his father as a question mark, an entirely unknowable entity, or worse, a void—find closure?  Buxbaum’s book shares a poignant story about life with a capital L, proving that it’s not always pretty nor tidy like a fairy tale.