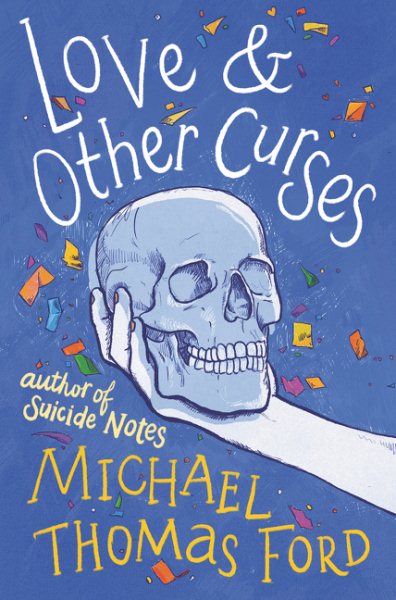 Love and Other Curses 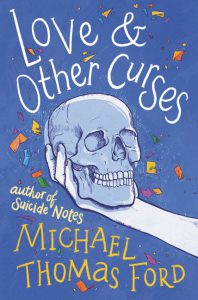 Love and Other Curses by Michael Thomas Ford is a book filled with surprises, ironies, and truths—some dark, others lighter and more colorful.  Set in Midgeville, New York, Ford’s novel tells the story of sixteen-year-old Sam Weyward who is pretty sure he’s the only guy in his school “who can replace a faulty kick-down switch and also create the perfect smoky eye” (9).  Although readers might envy Sam’s 1965 Ford F100 cherry red stepside pickup that belonged to his great-grandfather, they will likely cringe at the family curse, loss, and death that Sam endures.

According to the curse, if a Weyward falls in love before his or her seventeenth birthday, the beloved person dies.  This explains all the widows living in the Weyward home: Hank, Starletta, and Clodine, whom Sam calls the Grands. Even Sam’s mother, Ilona, left when her son was three days old.

Add to that trauma, Sam’s tumultuous identity exploration as he attempts to discover who he is and whom he wants to become.  Is he gay?  Is he transgender? Does he desire a drag queen identity?  Unsure about which identity he wishes to cultivate, Sam uses music as a balm to this complexity.  Music actually plays a major role in the story, not only through the box of twenty one albums that Sam’s mother left behind for him with notes on the sleeves but through the songs written and played by Linda, songs like “Blanket Fort,” which describes the human need for a safety net or a comfort spot where we feel secure, sheltered, and special.

As he struggles with his various anxieties, complicated relationships with people like Tom Swift, mixtures of emotions, and subsequent sleeplessness, Sam will occasionally dial a random telephone number and say, “Tell me a story.”  Some of the individuals he calls are less than forthcoming and kind, but Linda plays the role of a willing ear.  She not only serves as a sounding board for Sam—a confidante to whom he can confess his deepest, darkest secrets—but she gives Sam a reason to believe in magic and fortunes and other supernatural occurrences.  She also writes songs to relieve both Sam’s and her own grief. Sam tells Linda that he doesn’t want to be floating around aimlessly and alone but sharing his life experiences with someone else.  As they work out their dilemmas, Linda also shares proverbs with Sam, like the Russian saying, “Morning is wiser than the evening” (113) and the song lyric, “One small step for a girl, one giant leap for my heart” (120).  Sam decides that love is a huge risk that we take and then wait to see what happens.

The novel also shares significant morals and insights about family.  From Lola, who is also Garrison Beatty—a drag queen who owns and operates the Shangri-La, the local gay bar—Sam learns that family shows up in all kinds of surprising forms.  Family isn’t always blood, but people who genuinely care about one another. Lola also teaches Sam that “There are all kinds of drag.  Sometimes it looks like wigs and makeup; sometimes it’s just a face someone shows you when they’re afraid to show you their real one.”  Just as we never can really know another person by looking at them, we all keep secrets and hide things from others.

Ford extends the readers’ thinking on this subject with references to the band Kiss—the American rock band formed in New York City in January 1973 by Paul Stanley, Gene Simmons, Peter Criss, and Ace Frehley—and the musical group the Dolls, one of the first hard rock bands of the early punk rock scenes in the early 70s.  However, Tom tells Sam that being trans isn’t about playing dress-up but about getting harassed  for being who you are in a world that doesn’t accept or try to understand transgender people.

Despite its occasional slips into stereotypical tropes about adolescent angst, Ford’s novel does ask important questions about what it means to be normal and whether fairy tales are a pack of lies that promise happy endings or whether they were invented to distract people from how awful life can be.   Ultimately, Sam decides he has to cease living in the past and with what might have been and to write his own sound track.  He learns that curse or no curse, life is hard, and sometimes we just have to go on living it anyway and be happy for the parts that are beautiful.