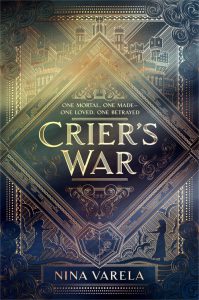 Because authors bravely explore controversial topics and ask important what if and why questions and then explore their potential results explains one of the reasons I love reading.  Authors who tackle bioethics are especially intriguing—perhaps because they ask significant questions before the moment when the decision seems like it has already been made.  With progress in life science, technology, and medicine, bioethical issues are increasingly confronting us on the evening news, in social media, and even in our own lives.  Books like Nina Varela’s Crier’s War not only open the topic of bioethics for young adult audiences but make it accessible.

In this debut YA fantasy, the first in what will be a duology, Varela writes about a world ruled by an oppressive android monarchy, a world that evolved after the War of Kinds, where humans are slaves because the Made are a dominant race.  Not only immune to disease, fatigue, and the effects of aging, these Automae are also superior in physical beauty and symmetry.

After Ayla’s family is killed by the android king, Ayla—a human girl—is determined to get revenge by killing King Hesod’s daughter, Crier, so that he can experience a similar anguish.  The death of her entire family leaves Ayla traumatized at age ten.  Besides the hope for revenge, the only comfort Ayla has is her locket.  This unimpressive necklace, a Made object, is considered forbidden, but she can’t bear to dispose of this gift from her mother, and now, the only proof that her family ever existed at all.  Initially, the object’s sentimental value and the mystery regarding its purpose—since it ticks with a soft rhythm—are its only interesting aspects since Ayla has never been able to open the locket.  A clever plot convention on Varela’s part, the locket comes to play a significant role in the story.

Tainted forever and a ghost of her past self, Ayla is a ruined shell of anger, muscle, and will—with the will to achieve revenge the strongest. When she gets a post as handmaiden to Crier, sixteen-year-old Ayla is convinced that she is in a position to help the Revolution, but those feelings occur before Ayla knows Crier, before she discovers Crier’s careful use of words, her ability to tell captivating stories, her tender and trusting ways, and her watchful, thoughtful eyes.  True, Crier is naïve, arrogant, and often clueless and foolish, but she has a stubborn side that desires to help the world to see from a different perspective, one that enables humankind to coexist–living harmoniously and with equality among the Made, not separate from them, not with one Kind judged as stronger and the other weaker, one dominant and the other submissive. Although Crier represents burning villages, ruined families, lost brothers, and wailing mothers, she also represents hope for genuine coexistence and equality, justice without bloodshed, and freedom from misery. This whole truth complicates Ayla’s dilemma and dilutes her resolve.

To further complicate Ayla’s desire for revenge, Crier is betrothed to Kinok, a keeper of the secrets about the Iron Heart—the source of heartstone, the sustenance required of all Automae.  Though Kinok is serious, controlled, and quiet, people are drawn to him because he is charismatic and loves a challenge.  Leader of the Anti-Reliance Movement (ARM), Kinok wants to see the race of humankind not just subjugated for their inferiority but obliterated.  As an alchemist, he envisions a race of designed beings who are no longer reliant on heartstone but who get their energy from tourmaline.  Whether Varela intended it or not, the initial rage over these gems, when those mined in Paraiba quickly became the most popular and most valuable tourmaline, is quite an appropriate metaphor for how humans often judge things based on their beauty and the character of their color.

Shrouded in mystery and secrecy, alchemy used to be considered an ancient practice in which its practitioners mainly sought to turn lead into gold, a quest that has captured the imaginations of people for a millennia. But alchemy encompasses so much more than that notion.  A kind of magic, alchemy involves the making of things thought impossible.  If lead and gold both consisted of fire, air, water, and earth—so the theory went—then surely by changing the proportions of the constituent elements, lead could be transformed into gold. That theory debunked, today we know that the universe is made up of atoms and elements and that it’s not possible to adjust the components in lead and turn them into gold.  Although alchemy never achieved its goals of immortality or of turning lead into gold, it did leave an important legacy: our search for perfection still lingers.

It is in this branch of alchemy that Kinok deals; he desires to achieve the ‘golden’ being, one resplendent with immortal beauty and endless energy.  And because he is a master manipulator, he tells Crier that she is flawed—that in addition to her Four Pillars of Reason, Calculation, Organics, and Intellect, her Maker added a fifth pillar: Passion.  With this additional pillar, this difference, Crier believes she is broken, an abomination.  This belief weakens her resolve and undermines her sense of self-worth.

Just as every genius draws from others, Kinok is also a people-mapper, another form of alchemy, one in which he maps human connections so that he can leverage these relationships, exploiting them for information and power.  According to Kinok, “You can learn a lot by tracing the connections from one mind to another” (223).  When Ayla discovers this map and realizes its threat, she wishes to break her ties with Benjy, her trusted friend and confidante, thinking that her connections to him will turn him into collateral damage.  After all, Ayla knows the price of love is grief.  Experience has taught her that love breaks a person, that love makes a person crave death as an escape from the pain of loss.

Just like human beings, this book has many layers and presents many conflicts:

Varela’s novel also poses a plethora of bioethical conundrums.  Bioethics is an important subject because the asking of questions encourages the essential exercise of our remembering “the why.” Why are we doing this? Why do we reflect on the moral permissibility of certain behaviors (culturally accepted or not)? As individuals and a culture, why do we allow certain things to happen and not others? Who should be allowed to decide what is right and what is wrong?  Bioethics is the exercise of asking these questions before they become hindsight—when we ask: what else could we have done; it seemed like the only choice?

Applying Marshal McLuhan’s famous tetrad might force us to think critically about and to uncover the hidden consequences of the technologies we develop.  This tetrad allowed McLuhan to apply four laws, framed as questions, to a wide spectrum of mankind’s endeavors, essentially providing a useful tool for examining our culture.  Every technological extension—in this case Designer Humans—has the effect of amputating or modifying some other extension.   When we become fascinated and obsessed with these extensions, too frequently we choose to ignore or minimize the amputations.  Flooded by technology and enjoying the luxuries it provides, we neglect caution; we have forgotten stories like Ray Bradbury’s (1951) “The Veldt,” which warns that “Happylife Home” with its superfluous technological gadgetry can kill us.  When technology contributes to obsolescence, the potentially grave consequences require reflection.

Whether read with a bioethical lens or by applying McLuhan’s tetrad, Crier’s War also invites interrogation of the following topics:

This book resides in a group of others that ask important ethical questions, books like The Giver quartet by Lois Lowry, the Hunger Games trilogy by Suzanne Collins, Feed by M.T. Anderson, and the Uglies quartet by Scott Westerfeld.