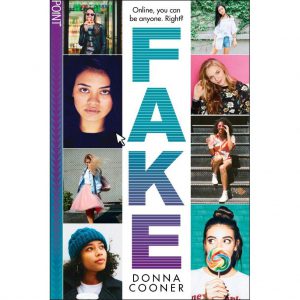 Although we humans all have insecurities and need training in loving ourselves in our own skin, these conditions are perhaps especially pronounced during our adolescent years when we walk school hallways, subjecting ourselves to snickering peers, poisoned looks, and whispered comments.  This is the conflict tackled by Donna Cooner in her novel Fake.

Attending Fort Collins High School in Colorado, Maisie Fernandez is a mixed race girl whose father is a Filipino Californian and whose mother is a white Texan.  Branded as one of the Froot Loops, Maisie learns that it isn’t easy being sixteen and fat.  Despite her artistic, humorous, and intelligent characteristics, she finds herself outside the hub of the magic trifecta of high school: popular, pretty, and skinny.  Craving acceptance, she achieves solace in what she does best: uses her artist’s vision to refocus and tamp down her negative feelings.  In her comic strips, she draws powerful, independent girls, but she is unable to draw herself as the hero of the story until she has shape-shifted.  The subject of her comics are her kind of people, “the freaks, misfits, and outcasts of high school.  It’s a mash-up of oversharing and revenge therapy” (34) in which characters shape-shift into wolves, dragons, and tigers and eat all the popular but mean bullies—people like Jesse Santos.  When Maisie is working on the Froot Loops strip, she isn’t afraid, alone, powerless, or the target of hatred.  She lets every worry go and escapes into her art, often taking inspiration from her idol, Lexi Singh, and imitating her style.

Her best friend, Owen Carpenter is another of the Froot Loops, but rather than resenting his status, he embraces being a high school misfit.  Not being normal is something of a badge of honor to Owen, who is crazy-smart and an intense collector of unusual things.  Because of these traits, Owen reminds Maisie of a raven.  And like a raven, Owen also has green eyes and uses logic to solve problems.  Soaring above all the high school drama, Owen stays true to who is he is, engaging in the self-study of esoteric topics like tea or hygge—the Danish concept of comfort.  His superpower is having no desire to blend in.  About friendship, he dispenses his brand of hygge wisdom to Maisie: “Gaining something doesn’t mean you have to lose something in return.  Sometimes our hearts just get bigger” (268).

Although Maisie has read all of the self-esteem building articles about loving the skin she’s in or embracing her body size, she doesn’t feel like she’s enough—no matter what her mother preaches or what the self-help mantras say.  Perky Pinterest posts don’t change the way she feels inside.  This insecurity grows into a hatred that morphs into an act of revenge: Maisie becomes a Maras, the Scandinavian name for a restless child whose soul leaves the body to haunt the living.

In an act of uncharacteristic deceit and anger, Maisie creates Sienna Maras, an online personality that she will use to bring down Jesse Santos, the face of the popular people.  Just as shape-shifters are awe-inspiring, powerful, and vicious in the stories that feature them, Sienna’s special powers will make Jesse Santos vulnerable.  Initially, this deception begins as a revenge stunt, but as Maisie grows obsessed with her creation, she becomes a defender against bullies, a champion for the underdog—so the thinks.  Maisie’s perception of the school dynamic is that people are classified and sorted according to predetermined characteristics like looks, money, brains, and friends: “All the factors go into this socially acceptable machine and out spits your place in the world” (58).

Because Maisie has experienced ridicule, humiliation, and rejection, her biggest fear is becoming invisible, so in creating Sienna, she lives vicariously through her as someone who gets noticed.  When Jesse takes the bait on ChitChat, an online social media site, and befriends Sienna, Maisie begins to learn things about Jesse that make her second-guess her initial assessment of him.  In revealing his own insecurities and fears to Sienna, Jesse humanizes himself.  When he shares his analogy for school popularity during a science lab, Maisie wonders further about her own categorizing tendencies. The more Maisie learns about the true Jesse, the more he turns out to be someone who doesn’t deserve to be the target of Maisie’s deceit.

Not only about Jesse but about other classmates, Maisie is discovering truths that make her see them differently.  They aren’t as one dimensional and shallow as she originally thought.  After entering a video contest to win an opportunity to meet with Lexi Singh, Maisie realizes we all have sides—even the popular, pretty, and skinny people—that we keep hidden from view, afraid others might crush our dreams.  Afraid of the judgment or labels that others may apply, sometimes we hide talents like ballet dancing, trumpet playing, or rocking babies.  Lexi gives Maisie brutal advice: “When an artist goes out into the world, she doesn’t see things the same way as everyone else.  It’s that difference—that uniqueness—that matters” (258).  Because that uniqueness—that truth—isn’t yet evident in Maisie’s drawings, Maisie again feels “not good enough.”

When Maisie’s deception is eventually uncovered, she breaks yet again. Unsure that she can survive, Maisie seeks advice from her dad, who tells her that somethings can’t be fixed; you just have to live through them.

As much as being real hurts and as much as she fears another rejection, Maisie stops imitating Lexi’s highly styled world of beautiful people and draws instead, slightly skewed and imperfect characters living in an unfair world.  With her new art voice, she captures the raw and visceral experience of being different.  She draws inspiration from her brokenness, realizing that the cracks add personality and wisdom of experience.

On Maisie’s self-discovery and self-acceptance journey, readers learn all of these lessons for living.  We also come to know that we are all more than others’ narrow perspectives of us and that we all have unseen hurts.  In this knowledge, we can feel less isolated and alone and search out our internal securities.

In addition to the teenager’s search for identity, belonging, and acceptance, Cooner’s novel shares intriguing truths about cultural identity, taking the reader beyond the tourist’s view of costumes and cuisine, heroes and holidays.  With glimpses into the Filipino side of Maisie’s character, readers realize that cultural heritage cannot be condensed into simple facts like eating halo-halo and chicken adobo.  In order to know a culture, it has to be lived in jeepney rides through bustling streets, shopping in tiny sari-sari stores, or by attending Mass.  Culture is lived day by day through that cultural group’s language, family kinships, and community social networks.