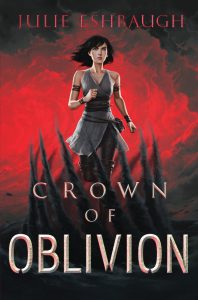 Readers of the Hunger Games by Suzanne Collins will likely find Crown of Oblivion by Julie Eshbaugh a lively read, rich with action and adventure but frightening with its plot line and themes about the abuses of power and the disparity in the treatment of human beings in their fight for both justice and survival.

Like Katniss Everdeen, Astrid Jael is a strong and feisty female character who has chosen to risk her life in a cutthroat competition in order to win her freedom and to gain citizenship for herself and her family.  With its choreographed cruelty, the Race of Oblivion grants citizenship with all of its privileges to only one winner each year.  For many of the other contestants, the race means death.

In Lanoria, Outsiders, who don’t have magic, are inferior to the Enchanted, who do. Using one of the Three Unities: Cientia, Pontium, and Projectura, the Enchanted control Outsiders, reminding them that they are worth little beyond the strength of their backs.  Outsiders are valued for their “ability to survive the hardest struggles, to be hurt, fall down, and still, to get back up again” (39).

Those are the facts of life for Astrid, an Outsider who is indentured to the royal family to pay off her family’s debts. She serves as the surrogate for the princess—if Renya steps out of line, Astrid is whipped at the stake for Renya’s transgressions.  Still, the two are friends.

Angered by the social inequities in a city where Outsiders scurry to serve the Enchanted or struggle under unbelievably heavy loads, performing jobs the Enchanted will not do, Astrid yearns to escape this cruelty.  With her own ability to use Cientia, Astrid can sense the desperation and pain in others.  After her father dies because he has been denied proper medical attention, Astrid’s grief ripens into rage, and she decides to enter the Race of Oblivion.

Injected with the drug Oblivion, Astrid wakes with amnesia somewhere outside the city wall.  Stripped of all her personal memories and armed with nothing more than a short list of instructions and a map to the first clue, she moves through the orchestrated competition, fighting to survive.

Other parallel characters can be found in Darius Kittering, Astrid’s fellow competitor in the Race of Oblivion, and Prince Lars, a satyric man who is all about cruelty and oppression.  Unrestrained in his use and abuse of power, the Prince has a total disregard for human life.

Despite the drawbacks, Astrid and Darius eventually agree to navigate the torturous Race of Oblivion as partners.  With Astrid’s magic and Darius’ ability to expertly negotiate bargains, they double their chances of completing the race.  But who will take the crown?

Along the way, the two stumble upon journalists who claim to be concerned with the public’s right to information, explaining that “Most enchanted have no idea about the horrors of the race.  We want to translate the struggles of the racers into words that will come alive on the printed page,” (141).  Whether these reporters wish to advocate for change, exploit the racers, or sensationalize the race will be the reader’s discovery.

Because there are strict rules against lending help to racers and the penalties are harsh for those who get caught, Darius and Astrid encounter people who avoid them and their questions.  Still, there are those who are willing to take the risk for these two who have lots of practice at persevering.

On the race route, Astrid and Darius discover the Heart of the Desert, a safe haven where Outsiders can escape persecution from the Enchanted Authority.   In this settlement, an Enchanted has no power over an Outsider.  Instead, the Enchanteds and Outsiders live as equals in a fully integrated society.  Although their original settlement was attacked by the Authority in an eradication attempt, those who survived literally went underground.  Although Astrid is tempted to drop out of the race and live in this compound below ground, such a decision would mean sacrificing her brothers—Jayden and Marlon.  Astrid is also invited to join the Outsider Liberation Army (OLA).

Replete with plot twists as Astrid combats deception, subterfuge, and surprises, Crown of Oblivion will leave readers shocked and potentially repulsed as they discover whether security, independence, family, rebellion, or enchantment will win out in the end.