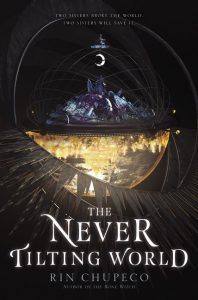 The balance between humans and nature is a recurring theme in The Never Tilting World by Rin Chupeco.  In her cautionary tale about the long-lasting and detrimental consequences of man-made climate change, Chupeco also includes hope and redemption.  Furthermore, she poses the question: What if the world didn’t tilt?  Although the book is targeted more towards young adults than fifth graders, that’s an awesome inquiry question since fifth graders would soon discover that without Earth’s tilt, humanity would be in a sorry state.

Set in both the sand-locked Golden City—where the sun is relentless and resources are scare—and in Aranth—where ignorance is a strength and inattention a survival trait, Chupeco’s story is told from four intertwining first-person narratives.  Haidee, Arjun, Tianlan, and Odessa must find a way to set the world in motion once again.

Haidee, daughter of the goddess Latona, is passionate about gears and cogs and determined to reject her mother’s plan to control her life—especially when she realizes her mother has been withholding information about her family and her legacy.

Skilled as a fighter and a sharp shooter, Arjun is a member of the Oryx Clan.  He finds himself bound to Haidee, although he is also infuriated by her.

Odessa is the goddess Asteria’s daughter in love with Catseye Tianlan, a healer who has been sent to protect her.

Latona has banned all talk of the Breaking in the Golden City and distracted everyone with merrymaking and revelry in exchange for their silence that they may soon perish.  But Haidee doesn’t want to carry on the lie or to only protect a select few.  She wants to help everyone outside the dome, too.

On the other side of the globe, Odessa begins to see visions that are linked to prophesies, so she decides to set out on a journey to the place of the world’s breaking to see if she has the power to heal the Earth.  When the world broke, the flow of magic in nature was disrupted as well. Odessa hopes to restore that balance.

Besides being an action-packed adventure story that reads like a warrior tale or a video game whose objective is escaping monsters and slaying villains, The Never Tilting World also addresses the subject of revenge and embraces the theme of power.  It asks such questions as: Does revenge mean more than life itself? Ultimately, Chupeco encourages readers to consider the power in standing together, which is more healing than the power in separation.  Any claim for control must also reject the shadows.

The Never Tilting World is the first installment in what promises to be a duology, a fact with potential to grip readers with anticipation—will the two goddesses succeed in reaching the Great Abyss? Which will fulfill the prophecy? Who will survive and who will perish? Why did their mothers lie?

To accompany these big questions, occasionally Chupeco explores the sidelines of humanity.  In one of these, she invites the reader to consider physical versus mental brokenness:

There are physical sicknesses.  Injuries that one can see and observe, such as broken bones and open wounds.  But there are other kinds of sicknesses that go beyond visible form, all the more dangerous because they are not so easily detected

And sometimes the people who suffer these injuries don’t believe they have them, or are unwilling to seek treatment for many reasons.  Sometimes it’s pride.  Sometimes it’s a sincere belief that there is nothing wrong.  But more often it is because of shame.  To accept that they need assistance implies that they are weak, that they cannot take care of themselves (259).

Such sidelines invite conversations around difficult topics like depression and mental illness.