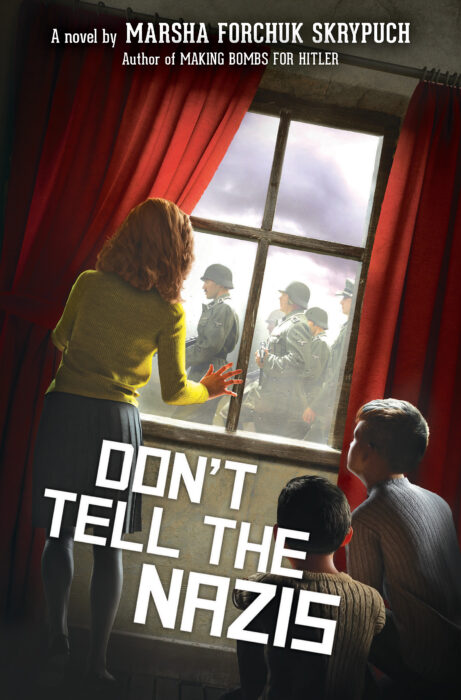 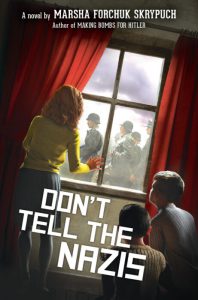 Set in 1941 in Viteretz, Ukraine, Don’t Tell the Nazis is a historical fiction account of events during the Soviet Occupation of Ukraine, the few days of “freedom,” and the German infiltration that followed.   Marsha Forchuk Skrypuch frames her story around real people and events so as to be true to the history but takes liberties to humanize it.

Readers follow the heroism of Krystia Fediuk, a twelve-year-old girl wishing to bring the hope back to her mama’s eyes after Tato’s death from cancer.  Krystia steps in to take on the tedious tasks that could wear her mama down, but she feels powerless against Ukraine’s oppressors.

When the Germans arrive, reopening the church and serving soup to all, Krystia celebrates at their good fortune.  But then she notices that the houses vacated by the Soviets begin to be occupied by German soldiers.  These new invaders are cleaner and more orderly than the Soviets, but they share commonalities.  The Germans seem just as keen about creating lists.  Although the Soviet lists were about money and education, the Germans’ are about heritage.

To take her mind off of these worrisome actions, Krystia plunges into her work.  But soon she notices that rewards are given or care denied based simply on one’s heritage. When the killing of Jews begins, she longs “for a simple life, where fathers live to see their children grow, and where governments didn’t kill them” (73).

Feeling angry, sad, frightened, and furious, Krystia wonders how she can fight back and not be shot as a rebel or an insurgent.  Soon, she finds simple ways: eavesdropping while cleaning the Commandant’s house, stealing food and redistributing it to the starving, becoming a courier for those working underground to make false passports for the Jewish to escape, and performing other small—and large—acts of defiance.

Amid the horror of war and the beginnings of the Jewish Holocaust, Krystia discovers other like-minded individuals conducting their own versions of kindness and compassion as the Ukrainians endure brutal work schedules, near starvation, and other acts of violence.  Living in the midst of death, Krystia realizes that not all of the Germans are Nazis and that she has been judging them by things they cannot control.   From Herr Zimmer, for example, she learns to treat people as individuals and not by what she thinks or assumes about the group or nation to which that person has affiliation.

Don’t Tell the Nazis joins the ranks of stories like Number the Stars by Lois Lowry (1998), The Boy in Striped Pajamas by John Boyne (2006), and My Brother’s Secret by Dan Smith (2015), novels written to capture the youth experience during the era of World War II. Skrypuch’s historical fiction account is captivating and compelling as it treks through this horrific time in history.  Through Krystia, readers learn the definition of bravery and the consequences of putting others’ needs before one’s own.  Readers also realize that survival often depends more on luck than on strength.