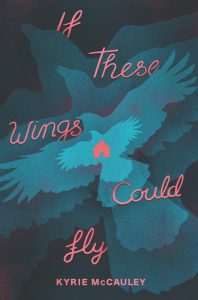 Leighton Barnes is a reader, an aspiring journalist, and an intense individual who has her dreams set on attending journalism school at New York University.  That dream will enable her to escape Auburn, Pennsylvania, and her home, where she lives amidst tension-induced anger and domestic violence.  If she leaves to attend college, however, Leighton wonders who will keep her sisters—Campbell, age 13 and Juniper, age 9—safe from their abusive father?  Although Jesse Barnes always apologizes and is nice otherwise; that behavior doesn’t excuse his terrible side.  However, since he’s not evil, just broken, he’s harder to hate.

Because of her father’s mercurial nature, Leighton is tangled in barbed wire, so her body language screams: “Proceed with Caution” (34). That demeanor has earned her nicknames like frigid bitch and Ice Queen.  So, when Liam McNamara, football star and self-assured student council vice president, turns on the charm, Leighton is suspicious and throws shade. Thanks to her homelife, she has seen “the flip side of the charming coin, and it isn’t a prince” (20). Still, something about Liam and his “Most Likely to Score a Modeling Contract While Running for Congress” (20) character traits draw Leighton like a crow to a shiny object.

Regarding such topics as a potential boyfriend, Leighton’s friend, a cheerleader and sportswriter, Sofia Roman softens Leighton’s intensity and reminds her to be a little more seventeen.  Leighton alone doesn’t have time to think about a guy when she has an article due, scholarship applications to write, and a future to plan that includes escaping Auburn.  But Sofia makes her want normal teenage things like a dress, a dance, and a date.

As a reader and writer, Leighton prefers journalism over literature, favoring journalism’s truth-seeking, logic, and general set of conventions over the way poetry can “shrug off proper grammar like an ill-fitting coat” (64).  Furthermore, the tragedy and broken hearts encountered in classic literature aren’t the only endings with meaning.

Even so, Leighton’s guard is always up as she navigates the cycles of terror and relief in her home, wondering if fear isn’t the toll women pay to exist in the world, wondering whether she should report her father’s abuse and ruin his reputation over what others may call “minor infractions,” and asking what if.  What if today her father goes too far and reaches for the gun he keeps on top of the refrigerator?  Occasionally, Leighton basks in rare moments of normalcy because “when you live in chaos, boring is a retreat [and] the mundane is magnificent” (187). But overlooking the little things, like the proper way to fold a towel, can be dangerous.

Speaking up can also be dangerous because a voice has power, and Leighton knows the history of that heartache from news stories that report domestic disputes that end in death. She hopes to one day make her words as a reporter worth their weight and to tell the stories that deserve to be brought to light.  But for now, saying nothing is the only way that she can see to keep her sisters and her mother safe.

These are the tough topics of Kyrie McCauley’s debut young adult novel If These Wings Could Fly.  While McCauley explores the sociological roots of violence, she also expertly exploits the metaphor as a convention to add layers of meaning to her story.  Readers will likely appreciate McCauley’s skill and nod knowingly at the analogy she draws between brand-new notebooks and babies.  Although both start out unblemished and with pure potential, as we add to them, encumber them, erase and try again, we don’t always get it right.  And we are “never quite able to fully obliterate the original mark” (59).

Similarly artful metaphors emerge when Leighton asks, “What is the weight of a word? . . . Maybe it’s measured by the harm it causes. . .. Bitch is a sliver of wood in my side—sharp.  Thick enough to hurt. But I can hold my breath and pull it out. I can keep moving” (201).  This metaphor, as well as other story elements, verify that words have power; they can dehumanize, objectify, and cause harm. They can also shed light in shadowy places, reveal truth, and make a difference.

In another meaningful analogy, McCauley uses the crow population to measure the passing of time and the increasing safety threat to the Barnes women.  Because Auburn is on the crow’s migratory path to Canada, their cawing has become the soundtrack of the Auburn community.  Many of the town’s citizens seek ways to eradicate the crows, but Leighton decides to feature the crows in her column for the school newspaper, wondering if a crow festival might not be more productive than a crow hunt.  Along with Leighton, the reader learns scientific facts about crow behavior as well as how the crow symbolizes change and new beginnings—one of which can be death.

One crow, a gray feathered fellow whom Leighton has named Joe, acts like a guardian to the Barnes girls.  Just as Boo Radley leaves gifts for Scout in To Kill a Mockingbird, Joe deposits treasures for Juniper, who not only leaves Joe food but writes him letters like, “Please save us.”   Serving as both another character as well as a plot convention, Joe plays a key role in the story’s outcome.

Motivated by her desire to escape and buoyed by her journalism advisor’s encouragement to plant a seed that might begin a growth process for deviation from the narrow path that many tread in Auburn, Leighton decides to use her words to upset the status quo.  Recalling one of her mother’s important questions during childhood: How big is your brave, Leighton enters the Auburn City Council’s scholarship essay contest and gives new meaning to life in Auburn.  She calls out the Council for focusing on something like the crow problem and allocating thousands of dollars to bring in experts to help drive the birds away while turning a blind eye to other more critical issues like sexism and domestic violence. Knowing that pride keeps the secrets of cruel men and believing that ignorance isn’t tradition and that no one has the right to be cruel, Leighton begins writing her essay Auburn born, Auburn proud with the truest sentence she knows and goes on to support her claim: “It is not the crows that make Auburn ugly” (320).

This is a powerful book that sheds light on an often-stigmatized subject.  McCauley not only tells her story with a sense of urgency but through the lens of hope.  While offering support to teens enduring such threats, she makes domestic violence everybody’s business.